Sometimes you may have observed that your parents would take an old gold ornament to a jeweller to get it cleaned and polished. After the polishing, the ornament comes back gleaming as good as new.

The jeweller would also weigh the ornament before and after polishing and the polished piece would invariably weigh slightly less than before. The first thing that comes to mind is the integrity of the jeweller. But are they stealing gold? Well, maybe. Let’s read more and find out. 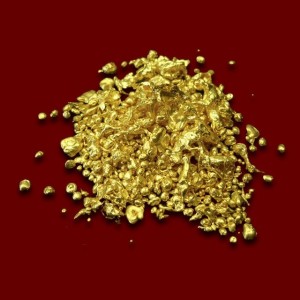 If you look in the annals of the Goldsmiths’ shops, you’ll find that after they take the ornament from you, they simply dip your gold ornaments for a little while in a solution, then rinse them with water before giving it back to you.

The reason why they always want you to come back later is either they are constrained on labor, or they just want to portray the process as difficult and skilful or there may actually be an ulterior motive. In any case, the gold ornament looks new and polished. If you scratch the surface a little, you would know that the solution in which the ornament was dipped, has actually eaten up a few microns of the surface of the ornament.

A few microns are not perceptible to the human eye. However, if you look at it from the jeweller’s perspective,  at the end of a day’s work, ‘polishing’ hundreds of ornaments for unsuspecting people, a ‘polisher’ may remove quite a  few grams of gold. He can retrieve this later by precipitating the gold using a  Sodium Bicarbonate solution. 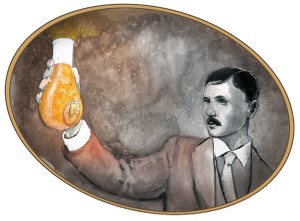 James Franck into Aqua Regia to prevent the Nazis from stealing them. He placed the resulting solution on a shelf in his laboratory at the Niels Bohr Institute. The Nazis, who thought the jar—one of perhaps hundreds on the shelving—contained common chemicals, ignored it. After the war, de Hevesy returned to find the solution undisturbed and precipitated the gold out of the acid. The gold was returned to the Royal Swedish Academy of Sciences and the Nobel Foundation, who then recast and presented the medals to Laue and Franck.

Let’s explore how the solution works.

The liquid that the goldsmith is using during cleaning the gold is called Aqua Regia. Literally translated from Latin, it means ‘King’s Water’. This chemical is responsible for the decreasing in weight of gold and silver. So how does it work? What exactly is the phenomenon occurring here? How is it formed?

s nothing but a mixture of Hydrochloric Acid and Nitric Acid, but it does not mean that mixing these two acids in random amounts is going to from Aqua Regia. To make Aqua Regia, it is important to note that it should be mixed in 3:1 amount, such that 3 parts of HCl [HYDROCHLORIC ACID] and 1 part of HNO3 [NITRIC ACID].

Aqua regia is very powerful and can dissolve noble metals like gold within minutes. That’s because the nitric acid and the hydrochloric acid in it, act together. When HNO3 and HCl are mixed, the following reaction takes place:

This hydro metallic chloride is soluble in Aqua Regia. Hence, the gold is polished or you can say that a thin layer of gold is shaved off from you. 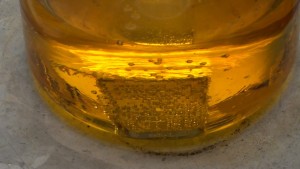 The above chemical process occurs during the cleaning of the gold ornament. Although the above chemical behavior might not be clear in general, people who have an understanding of science would be able to understand the magic that works. So the next time someone in your house takes an ornament for polishing, be sure to tag along.

Who knows, maybe you’ll be able to convince the jeweler into giving you the price of the lost gold! After all, he surely retrieves it from the Aqua Regia later and profits from it, apart from charging you some fees for giving you the service.