A phrase that one often gets to hear these days is ‘Generation gap’. This is the justification that we generally have when we have to satiate our frustration at irreconcilable opinions, habits or behavior that often find the older and younger generations at loggerheads. 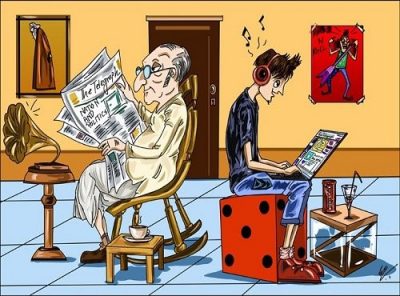 There are many reasons for the generation gap to exist. For instance, if you look at an Indian who is about 40 years old today, would have parents who would have been born in an environment that was under the British Raj. These are the people who would have gone through the stress of the country getting partitioned and eventually independence. The challenges that they would have faced would have been severe and there would have been an immense amount of struggle to get life back on tracks. The abysmal economic conditions, the war with China and Pakistan, apart from natural calamities like the famine, draughts, cholera etc. were times when many of them would have lost near and dear ones. Now our 40-year-old subject under consideration would also have an offspring who is born in the post liberalization era. He took birth in a free country, had technology at his disposal, easier means of transport and communication, and lots and lots of entertainment opportunities. So is it any surprise that the three generations cannot think alike? The consequences of the generation gap predominantly manifests in various ways as being enumerated under.

How to cope with the generation gap?

There is an old adage, where there’s a will, there’s a way. There are no technical solutions but empirical remedies can always be relied upon. Both impacted parties must first recognize the cause and be willing to resolve this knotty problem.