Veena Vadini Public School Budhela Singrauli Madhya Pradesh India, this is the Incredible Ambidextrous School in India where 150 students can write with their both hands.

Some of you might be thinking, how could it be possible that 150 students write with both hands in the same school?

Hardly one child in a million is ambidextrous (can write with both hands).

But it is true. History 18 channel has created a documentary on this school.

After viewing the video some of you already started practising.  🙂

I had done the same thing, but not able to do it.

So I tried to find the reason. After searching number of articles and theories, I found something interesting in it.

What do you mean by Ambidextrous?

Those are able to write with both hands are known as Ambidextrous. It is the state of being equally adopted in the use of both the left and right hand.

Yes, hardly one child in a million is born ambidextrous. Some scientist believes that when the fundamental structure of the brain was first formed in the womb, the choice to use both hands is influenced on that time.

Whether someone is right and left-handed or both handed has some relation to genetics, but the exact reason is unclear.

What Science Says about it

But ambidextrous people, neither hemisphere in the brain is dominant. Studies say the preference for using one hand over another is one the deepest mysteries of neuroscience. 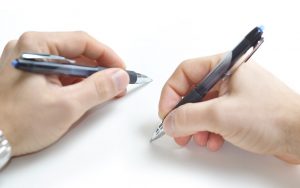 Can anyone be ambidextrous?

Yes, anyone can be ambidextrous. Practice makes a man perfect. It all depends on the individual choice. If a person wants to be ambidextrous then they would be, but it requires lots of hard work and practice.