Home » Aside » India: Education And Society ARTICLE 21-A: RIGHT TO EDUCATION

The State shall provide free and compulsory education to all children of the age of 6-14 in such manner as the State may, by law, determine.

ARTICLE 28: Freedom as to attendance at religious instruction or religious worship in certain educational institutions

(1) No religious instruction shall be provided in any educational institution wholly maintained out of State funds.

(2) Nothing in clause (1) shall apply to an educational institution which is administered by the State but has been established under any endowment or trust which requires that religious instruction shall be imparted in such institution.

ARTICLE 29: Protection of interests of minorities

(1) Any section of the citizens residing in the territory of India or any part thereof having a distinct language, script or culture of its own shall have the right to conserve the same.

(2) No citizen shall be denied admission into any educational institution maintained by the State or receiving aid out of State funds on grounds only of religion, race, caste, language or any of them.

ARTICLE 30: Right of minorities to establish and administer educational institutions

(1) All minorities, whether based on religion or language, shall have the right to establish and administer educational institutions of their choice.

(1A) In making any law providing for the compulsory acquisition of any property of an educational institution established and administered by a minority, referred to in clause (1), the State shall ensure that the amount fixed by or determined under such law for the acquisition of such property is such as would not restrict or abrogate the right guaranteed under that clause.

ARTICLE 45: Provision for free and compulsory education for children

The State shall endeavour to provide, within a period of ten years from the commencement of this Constitution, for free and compulsory education for all children until they complete the age of fourteen years

ARTICLE 350A. Facilities for instruction in mother-tongue at primary stage

It shall be the endeavour of every State and of every local authority within the State to provide adequate facilities for instruction in the mother-tongue at the primary stage of education to children belonging to linguistic minority groups; and the President may issue such directions to any State as he considers necessary or proper for securing the provision of such facilities.

NATURE OF SOCIAL CHANGE AND ITS IMPACT ON EDUCATION 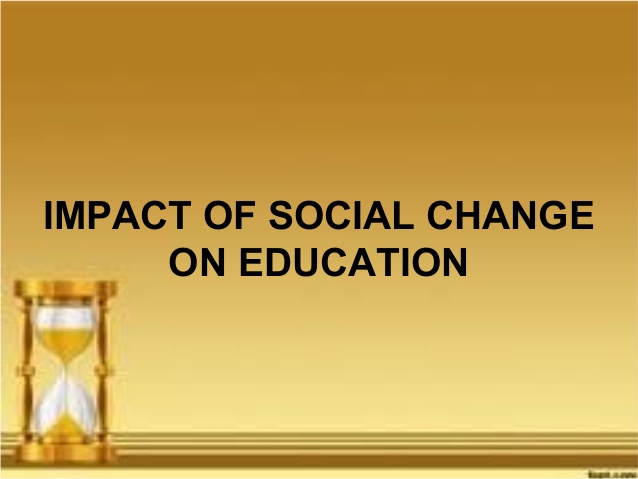 The change may be in the total social environment surrounding the society. It may be due to some internal forces or external forces arising in other societies. Social phenomena occurring in neighbouring or distant societies have a very widespread impact now. English, for example, is now becoming a world language for the dissemination of knowledge and consequently, India feels the necessity to emphasise the need for retaining and strengthening the knowledge of English in order to continue to be benefited by new knowledge developing all over the world.

The social change may be in social goals, objectives and values. The changes may be in social values that directly affect the content of social roles and social interaction. For example, the adoption of equality as a value may ultimately lead to compulsory and free primary education, to the expansion of primary educational facilities to all children up to the age of fourteen and to providing financial and other aid to backwards classes for enabling them to avail of the expanded educational facilities.

The social change may be ‘institutional’ which includes a change in more definite structures such as the form of organisation, roles and role content. The adoption of democracy and adult franchise in India has made training in responsible and responsive citizenship absolutely necessary for the electorate. This may ultimately affect the content and the method of teaching in educational institutions as well as the teacher-taught relationships.

CHANGES IN KNOWLEDGE AND TECHNOLOGY

CHANGE IN SIZE AND COMPOSITION OF POPULATION

The change may be in the size and composition of the population. The explosion of the population with differential rates of increase in different regions, communities, socio-economic groups and age groups may necessitate many changes in the educational system. Students with different levels of intelligence and educational aspirations, belonging to different socio-economic classes, different castes and religious groups have begun to come in the same type of educational institution and are huddled in the same classroom. All these changes also necessitate a change in the educational system.

Thus, different types of social changes occurring in society make the existing educational system dysfunctional to a certain extent and in course of time pressurise to bring changes in it. 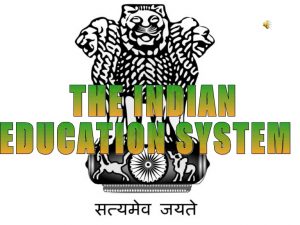 “As is well known, the existing system of education is largely unrelated to life and there is a wide gulf between its content and purposes and the concerns of national development…….

…..Instead of promoting social and national integration and making an active effort to promote national consciousness, several features of the educational system promote divisive tendencies; caste loyalties are encouraged in a number of private educational institutions; the rich and poor are segregated, the former attending the better type of private schools which charge fees while the latter are forced, out of circumstances, to attend free government or local authority schools of poor quality.”

Let us examine some of these lags in detail:

Efforts to implement the constitutional directive regarding free and compulsory education have brought children of lower classes in education. The enrolment of children in rural areas has increased a great deal. However, most of the villages lack good and adequate school buildings and the even adequate number of classrooms and teachers.

The British introduced a year-round operation with a summer vacation to suit their needs. As the schools and colleges in those days were largely confined to big cities and towns, no difficulties had arisen as regards attendance of students. Now, when the school has spread to rural areas, this cannot work as village children are needed for assistance in work during the agricultural season and consequently they remain absent for many days in school.

Today, the primary and secondary student population has become heterogeneous in terms of aspirations, abilities, socio-economic status and rural-urban upbringing. The needs and abilities of these different groups are different and sometimes the margins are very wide. Yet, in India, we go on with only one curricular programme with hardly any variation in the teaching and evaluating methods.

The explosion of knowledge makes it difficult for one person to know everything about his subject. This necessitates refresher courses for teachers and technical employees at all levels. The concept of continuing education also becomes relevant.

The need to teach children in their mother tongue at all levels has been recognised, but the efforts to realise these objectives are partial and halting. In India, we have the strange phenomenon of students studying through regional medium up to graduation and then required to learn through English medium at the post-graduate level. And even when the number of students who have learnt through the regional medium swells, English still remains the medium of instruction in a significantly large number of higher educational institutions. Besides, the medium of the transaction of political, administrative, legal and economic processes in the country still continues to be English.

MODERNISATION OF EDUCATION IN INDIA: PROBLEMS

The modernization of education in India becomes a special problem in several ways. India has adopted the path of economic development within the framework of a free society and therefore it cannot adopt authoritarian means to modernise education. The centre should get the willing consent of the states and each state has to get the willing consent of its elected representatives in their legislative assemblies before introducing any major change in the allocation of resources to education or in the educational system itself.

Secondly, India has no colonies to depend on for resources to meet the expenditure on modernising its educational system. It must depend on its own self and find out its own resources which are bound to be very limited. But, it can avail assistance from advanced countries and international agencies like UNESCO which have developed programmes to assist educational development in developing countries. However, the fact that this aid will also be limited must be taken into account

Thirdly, India has lots of diversities. Its economy is mixed, including modern factories along with traditional agriculture. Its tribal, rural and urban groups show very wide contrasts in their physical and social conditions of living. The different levels of development at which the various sections of society stand differentiate their educational needs and complicate the problem of educational development. The aims, methods and organisation of education which may be functional for one group may be dysfunctional for the other.

Thus, the Indian education system needs a complete overhaul through proper legislation and its effective implementation. Legislation should be made taking into account the regional diversities of each state. The masses should be made aware of the new developments.

Indian educational system suffers from so many drawbacks. But in spite of the limitations imposed by the slow and limited growth of education, education has become one of the influential instruments of social change in India. It has led to the mobilisation of people’s aspirations for development and change. Thus in modern complex national societies, education can neither be regarded as a controlling force conserving cultural heritage nor could it be viewed as an agent of social change. It can only be regarded as a cooperative force in bringing about social changes decided by the forces possessing more pervasive power in society.