Home » Ozone in the atmosphere – A Protective Layer

Ozone in the atmosphere – A Protective Layer

The formation and depletion of Ozone has since long been a much debated topic. While by now each of us knows that the Ozone layer in the atmosphere protects life on Earth by shielding the harmful ultraviolet radiations emanated by the sun.

However, Ozone closer to the ground is a source of one of the major air pollutant and a threat to the human health and vegetation.

Now, if that isn’t confusing, what is?

Let’s probe a little deeper to understand what exactly this dual role that Ozone plays is.

Ozone is thus formed under normal atmospheric conditions. Ozone molecules can also be decomposed by ultraviolet radiation into a free atom and an oxygen molecule. Ozone is thus continuously created and destroyed in the atmosphere by UV radiation coming from the sun.

Ozone in the atmosphere:

Ozone is mainly found in two regions of the Earth’s atmosphere. Most ozone (about 90%) resides in the Stratosphere (a layer that begins exists approximately between 10 to 50 kilometers) above the Earth’s surface.

This is the Ozone layer that we all hear about. The ozone layer acts as a natural filter absorbing most of the sun’s damaging ultraviolet rays – those that burn skin and cause some forms of skin cancer. Hence, the concern about the depleting ozone layer in the earth’s upper atmosphere.

The remaining ozone is in the lower region of the atmosphere, called the Troposphere. The Ozone in this layer is not emitted directly into the air but is created by chemical reactions between oxides of nitrogen (NOx) and volatile organic compounds (VOC).

Ozone is likely to reach unhealthy levels on hot sunny days in urban environments. Ozone can also be transported long distances by wind.  For this reason, even rural areas can experience high Ozone levels. 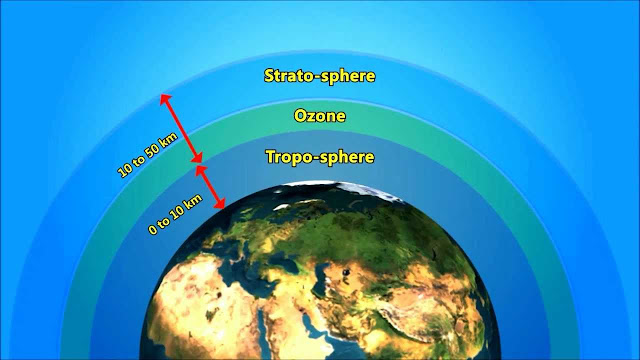 In the Stratosphere, the ozone layer absorbs and filters the sun’s ultraviolet rays, protecting the earth from harmful radiation. Scientists have reported a thinning of this shield. In some areas, such as in the Antarctic, “holes” have appeared in the Ozone layer. As the ozone shield thins, more ultraviolet rays penetrate the atmosphere, causing a variety of concerns.

It leads to skin related problems like sunburn, skin cancer, eye aging and suppression of the immune system. Many crops, including most of the world’s major food sources – wheat, rice, corn and soya beans – are particularly sensitive to ultraviolet radiation and can potentially get damaged.

Aquatic life closer to the surface of the oceans, including the fish also is impacted. Even industrial materials such as plastics and paints are susceptible; becoming yellow and brittle.

Ground-level ozone is a greenhouse gas and part of the complex inter-relationship affecting air quality. Higher concentrations will contribute to global warming and, in time, a warmer climate might lead to even greater ozone production. If the Stratospheric Ozone is depleted, more ultraviolet radiation will reach ground level to add to and increase undesirable ground-level ozone and photochemical smog.

Chemicals that contribute to Ozone changes

Methane is a product of agricultural, industrial and mining activities while Nitrous Oxide is from combustion and fertilizer use. Burning of fossil fuels is a major man-made cause of nitrogen oxides, while use of motor vehicles, solvents, and industrial processes in the petrochemical industry are sources of volatile organic compounds. These man-made emissions are more concentrated in urban and industrialized areas.

The ozone layer is critical to the survival of the human race. This is the reason that it is escalated at a global level with different countries participating and discussing measures to alleviate the depletion of the Ozone layer.