Home » The Quest for Black Gold

The Quest for Black Gold 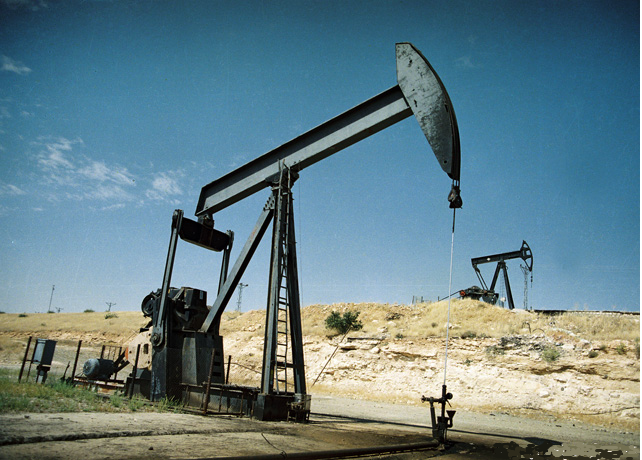 Petroleum has been what the mankind has understood as a lifeline for economic development as well as a geo-political advantage for nations that possess the reserves. Ever since the Industrial Revolution, population’s demand for petroleum has been on the rise. Wars have been fought to achieve a dominant position and international geo-politicking happens over this fossil fuel.

Till the late nineties, petroleum was essentially produced by drilling and extracting crude oil from conventional reservoirs. It works like putting a straw into a coconut and sipping out the water. But as the demand for oil increased, the supply had to keep pace. As a result of this increased demand, newer deposits, deeper oilrigs were used. Search for alternative options were also explored.

The new method of extraction of oil came from Shale. Shale is the soft finely stratified sedimentary rock that formed from consolidated mud or clay and can be split easily into fragile plates. It was found that oil deposits exist within these rocks. Extraction requires a technique through which the flow has to be stimulated. Fracturing the rocks is the only way to do this. The technique of injection of pressurized liquids into the fractures in which the rock is cracked down and oil and gas can be extracted from it is known as hydraulic fracking or simply Fracking. Here you can download cbse study material for class 8

Fracking as a process

Hydraulic fracturing is a stimulation technique in which rock is fractured by a pressurized liquid. It involves safely tapping shale and other tight-rock formations by drilling a mile or more below the surface before gradually turning horizontal and continuing several thousand feet more. Further this process involves the high-pressure injection of ‘fracking fluid’ (water (90 percent), sand (9.5 percent) and additives (0.5 percent) proppants suspended with the aid of thickening agents) into a wellbore to create cracks in the deep-rock formations through which natural gas, petroleum, and brine then flows more freely. When the hydraulic pressure is removed from the well, small grains of hydraulic fracturing proppants (either sand or aluminum oxide) hold the fractures open.

In India, estimates of shale gas resources vary from 63 Trillion Cubic Feet (TCF) by Energy Information Administration (US) to as high as 2000 TCF by Schlumberger, of which the recoverable resources range between 100 and 300 TCF. In comparison, India has 50 TCF of conventional natural gas reserves. In order to tap this resource, the Government of India came out with a Shale Gas and Oil Policy in 2013, which restricted exploration and production to National Oil Companies only. Consequently, ONGC and OIL were given blocks mainly in Gujarat to test shale production technology and potential.

Apart from the obvious advantages of Fracking, there are some associated disadvantages too. Scientists have found that hydraulic fracturing and other oil and gas operations have resulted in contaminating groundwater and altered environmental conditions.

The maximum ecological disturbance as a result of Fracking has been observed in Oklahoma (California).

Oklahoma has experienced a major increase in earthquakes in recent years, including a 5.7-magnitude tremor that injured residents and damaged 200 buildings in November 2011. Swarms of quakes have continued in 2015. In 2014, Oklahoma was the most seismically active state in the Lower 48 and recorded three times as many quakes as California. 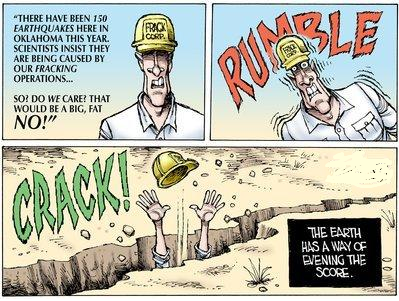 The cause of these earthquakes near fracking sites is not believed to be just because of the act of drilling and fracturing the shale itself, but rather due to the disposal wells that need to be created in the process. Disposal wells are the final resting place for used drilling fluid. These waste wells are located thousands of feet underground, encased in layers of concrete. Scientists also refer to the earthquakes caused by the injection of fracking wastewater underground as “induced seismic events.” Fracking has resulted in a surplus oil production and is geo-politically significant, but what is the price that needs to be paid for economic advantage is the question the global leaders would need to ask themselves. Meanwhile, rising instances of earthquakes leave the citizens with not much of options but to suffer personal and property losses in silence and ignorance.