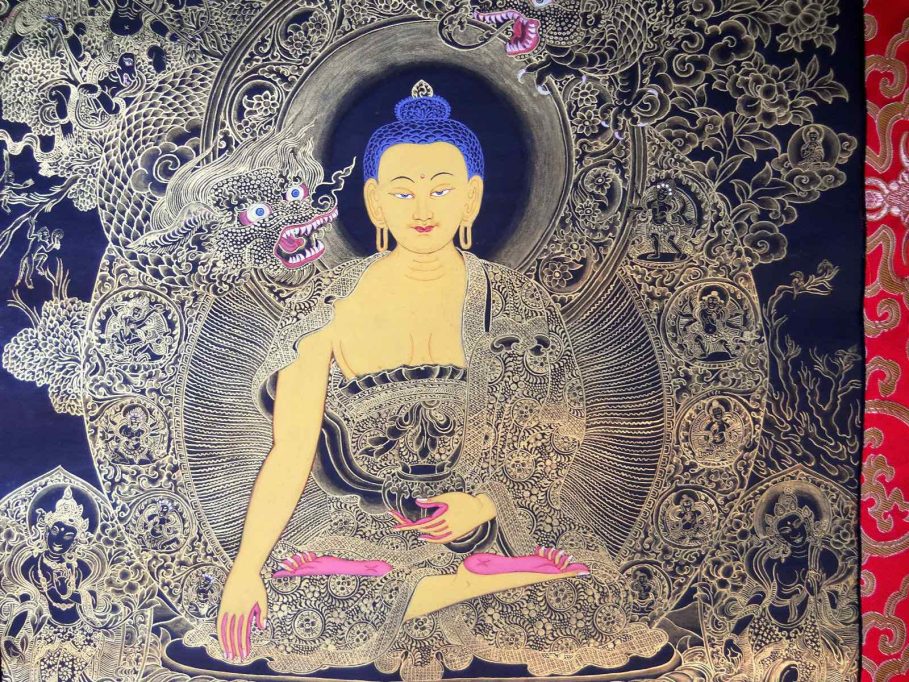 A thangka is a art form that originated in Nepal dating back to the 6th or the 7th century, when it was exported to Tibet after Princess Bhrikuti of Nepal, daughter of King Lichchavi married Songtsan Gampo, the ruler of Tibet.


These are paintings on cotton, or silk appliqué, usually depicting a Buddhist deity, scene, or mandala. Traditionally kept unframed and rolled up when not on display, Thangkas are mounted on a textile backing, with a further silk cover on the front.

In the 11th century, as Buddhism manuscripts and religious icons were needed in the growing number of newly built monasteries, the Nepalese developed this new type of religious painting on cloth that could be easily rolled up and carried. These early Nepalese Thangkas were simple in design and composition.

The main deity is usually a large figure that occupies the central position and may be surrounded by smaller figures or lesser divinities. Over the centuries these paintings became a unique and distinctive art.

Particularly in the modern day, Nepalese Thangka art is known for the variety of colors, making the Thangkas much finer as works of art beyond their traditional religious origins.

Many finer hand-made Nepalese Thangkas paintings use 24k pure gold as accents, adding a special luster not found anywhere else in the world.

80 percent of Thangka art produced and sold around the world comes from Nepal. The art tradition has been preserved among certain communities and families of painters who have inherited the skill from their forefathers for generations.

From the canvas preparation and drawing of the subject, through to the mixing and applying of colors, decorating with gold, and mounting the finished work in brocade, the creation of a Thangka painting involves skill and care at each stage and displays meticulous detail and exquisite artisanship.

Thangka painting requires extended concentration, attention to detail, and knowledge of Buddhist philosophy, and must be carried out in a peaceful environment.

Whereas typical thangkas are fairly small, with painted area between about 20 to 50 centimetres high, there are also giant festival thangkas, usually appliqué, and designed to be unrolled against a wall in a monastery for particular religious occasions. These are likely to be wider than they are tall, and may be sixty or more feet across and perhaps twenty or more high. There are also larger than average Thangkas that were designed for altars or display in temples.

Due to the unstable political environment over the last 10 years, daily power outages of up to 12 hours a day and changing economics, fewer artists are willing to submit to the harsh conditions or have the dedication to becoming a Thangka art expert, which requires training of over 25 years. This has caused many artists to abandon the craft, leaving very few Thangka artists today. As such, Nepalese Thangka art may be slowly dying out as an art form.