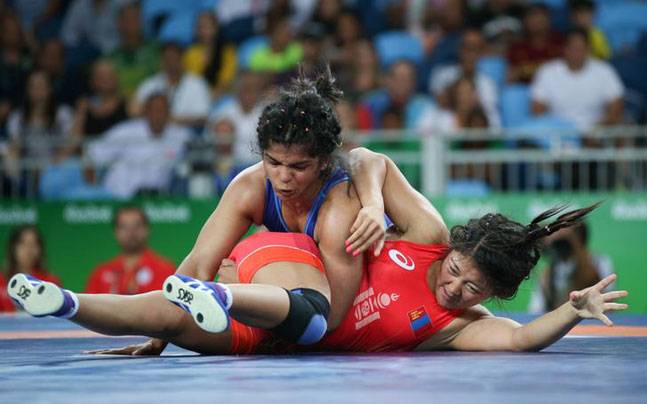 Wrestling is considered the oldest sport on earth.  Wrestling has been part of the Olympic program 27 times.

A fascinating mix of primal hand-to-hand combat and complex tactics, wrestling has been in the Games since Athens 1896. There are two disciplines: freestyle, with six different events for men and women, and Greco-Roman, only for men.

Two wrestlers grapple with each other in a defined area, each attempting to manoeuvre their opponent into point-scoring holds and throws, forcing their opponent’s shoulders on to the mat, or a match-winning fall.

Technique, stamina and brute strength are all on display in this fast-paced version of a centuries-old sport, in which athletes compete in the purest sense, with no equipment and no hitting, and a surprisingly noble code of conduct.

Wrestling is one of the original sports in the ancient Olympic Games in Greece, dating back to 776 B.C. The Ancient Olympic Games were founded in a search for Truce, so competition could replace deadly conflict.  This Truce lasted for 293 consecutive Olympics, spanning 1,200 years (776 BC – 393 AD) making it the longest running peace accord in human history.

Wrestling embodies the Olympic spirit and is exactly what the IOC stands for. It is an inclusive sport that provides opportunities to athletes worldwide, regardless of geography, race, gender, or physical characteristics. There are few barriers to entry. Only two people and a flat surface are needed to compete.

It is one of the most diverse sports in the world with almost 200 nations participating worldwide.  71 countries qualified to compete in the 2012 London games, and 29 different countries medaled. After the Rio Olympics a total of 410 medal sets have been awarded in Olympic Wrestling.

Wrestling builds determination, diligence and perseverance.  Wrestlers are known for their work ethic. There has been 27 different Events in Olympic Wrestling.

Many countries have their own unique traditional style of wrestling.  Many of these disciplines are ingrained into their culture, and include grandeur ceremonies, festivities, and celebrations.