Explain consumer’s equilibrium with the help of Indifference Curve Analysis.

(a) If MRSXY > PX/PY, it means that the consumer is willing to pay more for X than the price prevailing in the market. As a result, the consumer buys more of X. As a result, MRS falls till it becomes equal to the ratio of prices and the equilibrium is established.

(b). If MRSXY < PX/PY, it means that the consumer is willing to pay less for X than the price prevailing in the market. It induces the consumer to buys less of X and more of Y. As a result, MRS rises till it becomes equal to the ratio of prices and the equilibrium is established. 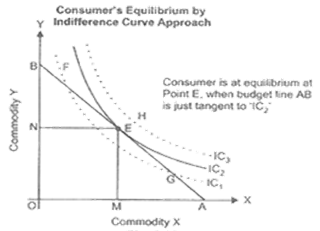 Thus, we can conclude that if the consumer is consuming any bundle other than the optimum one, then he would rearrange his consumption bundle in such a manner that the equality between the MRS and the price ratio is established and he attains the state of equilibrium.

Explain the relationship between prices of other goods and demand for the given period.

Price of Other Goods and Demand for the given Good:
Quantity demanded of a good depends on the price of other goods (i.e. related goods). Any two goods are considered to be related to each other, when the demand for one good changes in response to the change in the price of the other good. The related goods can be classified into following two categories.

A. Substitute Goods:
Substitute goods refer to those goods that can be consumed in place of each other. In other words, they can be substituted for each other. For example, tea and coffee, Colgate and CLOSE UP, Cello pens and Reynolds pen, etc. In case of substitute goods, if the price of one good increase, the consumer shifts his demand to the other (substitute) good i.e. rise in the price of one good result in a rise in the demand of the other good and vice-versa.
For example, if price of tea increases, then the demand for tea will decrease. As a result, consumers will shift their consumption towards coffee and the demand for coffee will increase. It should be noted that the demand for a good moves in the same direction as that of the price of its substitute.

Explain any two factors that affect the price elasticity of demand. Give suitable examples.

The following are the two factors that affect the price elasticity of demand.

2. Number of Uses:
If the commodity under consideration has several uses, then its demand will be elastic. When price of such a commodity increases, then it is generally put to only more urgent uses and, as a result, its demand falls. When the prices fall, then it is used for satisfying even less urgent needs and demand rises.
For example, electricity is a multiple-use commodity. Fall in its price will result in substantial increase in its demand, particularly in those uses (like AC, Heat convector, etc.), where it was not employed formerly due to its high price. On the other hand, a commodity with no or few alternative uses has less elastic demand.

14. Giving reasons, state whether the following statements are true or false.
When equilibrium price of a good is less than its market price, there will be competition among the sellers.

True, when equilibrium price of a good is less than its market price then there will be competition among the sellers. At a price lower than market price, there will be more supply. This is explained with the help of the following diagram. 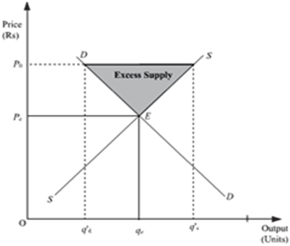 Production in an economy is below its potential due to unemployment. Government starts employment generation schemes. Explain its effect using production possibilities curve. 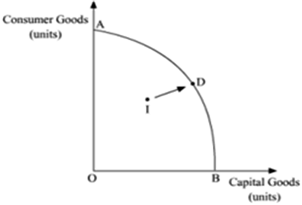 The price elasticity of demand for a good is − 0.4. If its price increases by 5 percentage, by what percentage will its demand fall? Calculate.

Giving reasons, state whether the following statements are true or false.
A monopolist can sell any quantity he likes at a price.

False, a monopolist cannot sell any quantity he likes at a price because the monopolist controls only the supply and not the demand. A monopolist can only determine one of two things. It has to be either price or quantity; this is because there is a fixed price consumers are willing to pay for a given quantity. As a result a monopolist can only charge the price corresponding to the specific quantity he has set otherwise the goods he has produced won’t be sold. This is because he has no control over the quantity that he can sell in the market. Rather, it depends on the buyers that what quantity of output they want to purchase at the price fixed by the monopolist. If the monopolist fixes a higher price, then lesser quantity of the output will be demanded and lesser quantity will be sold in the market. On the other hand, if he fixes a lower price, then higher quantity of the good will be sold.

Explain “large number of buyers and sellers” features of a perfectly competitive market.

The number of buyers and sellers operating under perfect competition is very high. As the number of individual sellers very large, an individual seller cannot fix the price. Similarly no single buyer can fix the price or change it by his action. Even if he increases or reduces demand, it does not make any effect on the total demand in the market. Price of a product is determined by the interaction of total demand and total supply in the market. Hence every seller and buyer under perfect competition is a price taker and not a price maker.

Explain the Law of Variables Proportions with the help of total product and marginal product curves.

Assumptions of Law of Variable Proportions:
1. Constant State of Technology: First, the state of technology is assumed to be given and unchanged. If there is improvement in the technology, then the marginal product may rise instead of diminishing.

2. Fixed Amount of Other Factors: Secondly, there must be some inputs whose quantity is kept fixed. It is only in this way that we can alter the factor proportions and know its effects on output. The law does not apply if all factors are proportionately varied. The whole production phase can be distinguished into three different production stages.

IIIrdStage: Negative Returns to a Factor
This stage begins from the point H on the TP curve. Throughout this point, TP curve is falling and MP curve is negative. Simultaneously, the AP curve continues to fall and approaches the x-axis (but does not touch it).

Explain the conditions of producer’s equilibrium with the help of a numerical example.

Equilibrium refers to a state of rest when no change is required. A producer is said to be in equilibrium when it has no inclination to expand or to contract its output. This state either reflects maximum profits or minimum losses. The conditions of producer's equilibrium can be explained through the MR-MC approach. In this approach, the producer attains equilibrium where the following two conditions are fulfilled.

(i) MR = MC:
As long as MC is less than MR, it is profitable for the producer to go on producing more because it adds to its profits. He stops producing more only when MC becomes equal to MR.