Download the PDF Sample Papers Free for off line practice and view the Solutions online.
Advertisement

Explain “Banker to the Government” function of the Central Bank.

Also central bank carries out exchange, remittance, and other banking operations on behalf of the government. Central bank gives loans and advances to governments for temporary periods, as and when necessary and it also manages the public debt of the country. At the same time, central government can borrow any amount of money from RBI by selling its rupees and securities to the later.

Calculate “sales” from the following data:

Explain the circular flow of income.

Assumptions of the Model:
The circular flow model in a two-sector economy is based on the following assumptions.

1. The economy consists of only two sectors namely, the households and the firms.

2. It is assumed that there is no government sector in the economy, so no taxes and transfer payments.

3. The economy considered is a closed economy i.e. it is assumed that there is no foreign sector. In other words, there is no external trade in the form of imports and exports.

4. The households spend the entire income received on the goods and services. In other words, it is assumed that there is no saving in the economy. 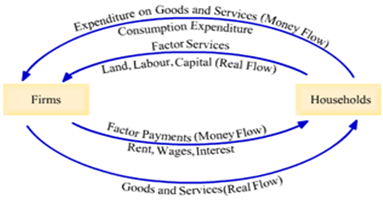 The above diagram depicts a two-sector circular flow model.
The inner arrow in the upper part of the diagram shows that the household sector provides factors services in the form of land, labour and capital to the firms. In return of the factor services provided, they receive factor payments from the firms in the form of rent, wages and interest (as shown by the upper most arrow). With the income received, households incur consumption expenditure on the goods and services provided to them by the firms (as shown by the lower most arrow).

Hence in two-sector model, we observe that the aggregate spending of the economy (consumption expenditure) equals the aggregate income earned by the factors of production (factor payments).

Distinguish between balance of trade and balance on current account.

Explain the effect of appreciation of domestic currency on imports.