State the law of radioactive decay.

Plot a graph showing the number (N) of undecayed nuclei as a function of time (t) for a given radioactive sample having half-life T½.

Law of radioactive decay states that, the number of nuclei undergoing decay per unit time, at any instant, is proportional to the total number of nuclei present in the sample at that instant. 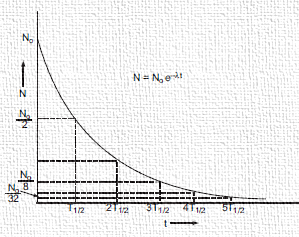 (b) Draw a ray diagram to show the image formation by a concave mirror when the object is kept between its focus and the pole. Using this diagram, derive the magnification formula for the image formed.

Object distance from pole P1 is u.

Image formed is at a distance of v’ from P1.

Now, using the refraction formula at spherical surface, we have

Distance of I from pole P2 of second surface is v.

Thickness of the lens is negligibly small as compared to v’.

Now, using the lens formula, we get

is the required Lens maker’s formula.

b) Ray diagram for the image formation of an object between focus (F) and pole (P) of a concave mirror is given by, 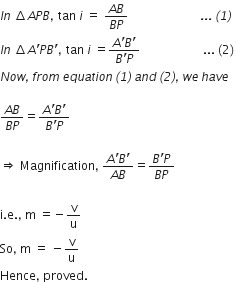 Derive an expression for the impedance of a series LCR circuit connected to an AC supply of variable frequency.

Plot a graph showing variation of current with the frequency of the applied voltage.

Tuning mechanism of a radio or a TV set.

Suppose a resistance R, inductance L and capacitance C are connected to series and an alternating voltage V =

is applied across it.

Since L, C and R are connected in series, current flowing through them is the same. The voltage across R is VR, inductance across L is VL and across capacitance is VC.

Clearly VC and VL are in opposite directions, therefore their resultant potential difference =VC -VL (if VC >VC).

Thus, VR and (VC -VL) are mutually perpendicular and the phase difference between them is 90°. As seen in the fig, we can say that, as applied voltage across the circuit is V, the resultant of VR and (VC -VL) will also be V. 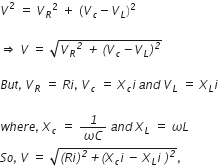 Therefore, Impedance of the circuit is given by,

This is the impedence of the LCR series circuit.

The below graph shows the variation of current with the frequency of the applied voltage. 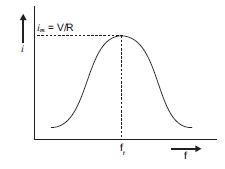 A radio or a TV set has a L-C circuit with capacitor of variable capacitance C. The circuit remains connected with an aerial coil through the phenomenon of mutual inductance. Suppose a radio or TV station is transmitted a programme at frequency f, then waves produce alternating voltage of frequency f, in area, due to which an emf of same frequency is induced in LC circuit, When capacitor C is in circuit is varied then for a particular value of capacitance,

, the resonance occurs and maximum current flows in the circuit; so the radio or TV gets tuned.

(i) With the help of a labelled diagram, describe briefly the underlying principle and working of a step up transformer.

(ii) Write any two sources of energy loss in a transformer.

(iii) A step up transformer converts a low input voltage into a high output voltage.

Does it violate law of conservation of energy? Explain.

i) Underlying principle of a step-up transformer:

A transformer which increases the ac voltage is known as a step up transformer. 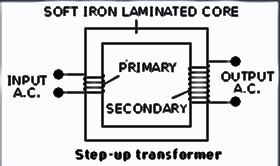 ii) Two sources of energy loss in the transformer:

Joule Heating – Energy is lost in resistance of primary and secondary windings in the form of heat.

Flux leakage - Energy is lost due to coupling of primary and secondary coils not being perfect, i.e., whole of magnetic flux generated in primary coil is not linked with the secondary coil.

iii) Conservation of law of energy is not violated in step-up transformer. When output voltage increases, the output current automatically decreases. Thus, there is no loss of energy.

(a) Draw a ray diagram to show refraction of a ray of monochromatic light passing through a glass prism.

Deduce the expression for the refractive index of glass in terms of angle of prism and angle of minimum deviation.

(b) Explain briefly how the phenomenon of total internal reflection is used in fiber optics.

a) The phenomenon of refraction for a ray of monochromatic light passing through a glass prism is shown as below:

Let, PQR be the principal section of the prism.

The refracting angle of prism is A. Monochromatic light EF is incident on face PQ at angle of incidence i1. This ray enters from a rarer to denser medium and hence is refracted towards the normal FN. Refracted ray is FG. Angle of refraction for this face is r1. Refracted ray FG becomes incident on face PR and is refracted away from the normal GN2 and emerges in the direction GH. The angle of incidence on this face is r2 (into prism) and angle of refraction (into air) is i2. At point O, incident and the emergent ray meet. The angle between these two rays is called the angle of deviation ‘

The normal FN1 and GN2 on faces PQ and PR respectively, when produced meet at N. 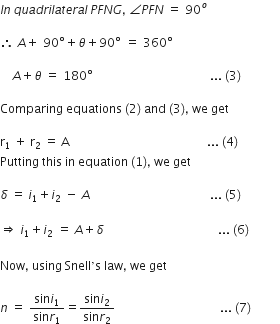