(i) Which mode of propagation is used by shortwave broadcast services having frequency range from a few MHz upto 30 MHz ? Explain diagrammatically how long distance communication can be achieved by this mode.

(ii) Why is there an upper limit to frequency of waves used in this mode? 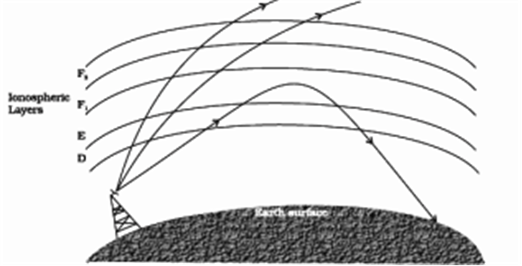 ii) There is an upper limit to the frequency of waves used in sky wave propagation because electromagnetic waves of frequencies higher than 30MHz, penetrate the ionosphere and escape whereas waves less than 30 MHz are reflected back to the earth by the ionosphere.
4152 Views
22.

Consider a plane wave front incident on a thin convex lens. Draw a proper diagram to show how the incident wave front traverses through the lens and after refraction focusses on the focal point of the lens, giving the shape of the emergent wave front.

(i) When monochromatic light is incident on a surface separating two media, the reflected and refracted light both have the same frequency as the incident frequency.

ii) When light travels from a rarer to a denser medium, the speed decreases. Does this decrease in speed imply a reduction in the energy carried by the wave?

Wavefront is defined as the locus of all the points in space that reach a particular distance by a propagating wave at the same instant.

i) Each point of the wavefront is the source of a secondary disturbance and the wavelets emanating from these points spread out in all directions. These travel with the same velocity as that of the original wavefront.

ii) The shape and position of the wave-front, after time 't', is given by the tangential envelope to the secondary wavelets.

A plane wavefront is incident on a thin convex lens:

i) Reflection and refraction arise through interaction of incident light with atomic constituents of matter which vibrate with the same frequency as that of the incident light. Hence, frequency remains unchanged.

ii) No, energy carried by a wave depends on the amplitude of the wave, not on the speed of wave propagation.

iii) For a given frequency, intensity of light in the photon picture is determined by the number of photon incident normally on crossing unit area per unit time.

(ii) Light from a point source in air falls on a convex spherical glass surface of refractive index 1.5 and radius of curvature 20 cm. The distance of light source from the glass surface is 100 cm. At what position is the image formed ?

The figure given above shows the geometry of formation of real image I of an object O and the principal axis of a spherical surface with centre of curvature c and radius of curvature R.

1. The aperture of the surface is small compared to other distance involved.

2. NM is taken to be nearly equal to to the length of the perpendicular from the point N on the principal axis.

Assuming the incident ray is very close to the principal axis, all the angles are very small. Hence, for small angles,

Putting the values of i and r from eqns. from (i) and (ii), we have

Putting these values in equation (iii), we have

ii) According to the question, 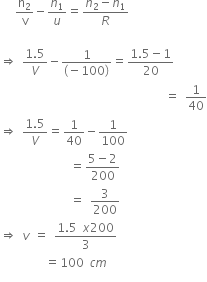 (i) If two similar large plates, each of area A having surface charge densities 1s and 2s are separated by a distance d in air, find the expressions for

(a) field at points between the two plates and on outer side of the plates. Specify the direction of the field in each case.
(b) the potential difference between the plates.
(c) the capacitance of the capacitor so formed.

(ii) Two metallic spheres of radii R and 2R are charged so that both of these have same surface charge density s. If they are connected to each other with a conducting wire, in which direction will the charge flow and why ? 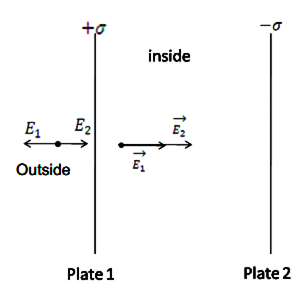 Given, each plate has an area A and surface charge densities 1s and 2s respectively.

The plates 1 and 2 be separated by a small distance d.

In the inner region between plates 1 and 2, electric fields due to the two charged plates add up.

Direction of electric field is from positive to the negative plate.

b) Potential difference between the plates, V = Ed =

c) Capacitance of the capacitor so formed, C =

ii) Potential on and inside of charged sphere is given by,

That is, the sphere having larger radius will be at a higher potential.

(i) Explain with the help of a diagram the formation of depletion region and barrier potential in a p-n junction.

(ii) Draw the circuit diagram of a half wave rectifier and explain its working.

As a result of the movement of holes from p-side, they leave ionised spaces (negative charge) on p-side near the junction. Similarly, a positive space charge region is formed on the n-side due to the diffusion of electrons from n-side. The two space charge regions on either side of the junction is called as depletion region.

A potential difference is developed across the junction of two regions, which is known as the barrier potential. The reverse polarity of this potential opposes further flow of carriers.

Working: When an alternating voltage is applied across a diode in series with a load, a pulsating voltage will appear across the load only during that half cycle on the AC input during which the diode is forward biased.

In the positive half cycle of AC input, a current flows through load resistance RL and we get the output voltage.

In the negative half cycle, there is no output. Therefore, the output voltage is restricted to only one direction and is said to be rectified.
3995 Views
26.

For a CE-transistor amplifier, the audio signal voltage across the collector resistance of 2 k

is 2 V. Suppose the current amplification factor of the transistor is 100, find the input signal voltage and base current, if the base resistance is 1 kV.

Then input signal voltage is,

(i) Draw a labelled diagram of a step-down transformer. State the principle of its working.

(ii) Express the turn ratio in terms of voltages.

(iii) Find the ratio of primary and secondary currents in terms of turn ratio in an ideal transformer.

(iv) How much current is drawn by the primary of a transformer connected to 220 V supply when it delivers power to a 110 V- 550 W refrigerator?

Principle:
Transformer is based on the principle of electromagnetic mutual induction.

iii) For an ideal transformer, according to the law of conservation of energy,

(i) Use Gauss’s law to find the electric field due to a uniformly charged infinite plane sheet. What is the direction of field for positive and negative charge densities?

(ii) Find the ratio of the potential differences that must be applied across the parallel and series combination of two capacitors C1 and C2 with their capacitances in the ratio 1 : 2 so that the energy stored in the two cases becomes the same.

i) Electric field due to a uniformly charged infinite plane sheet: 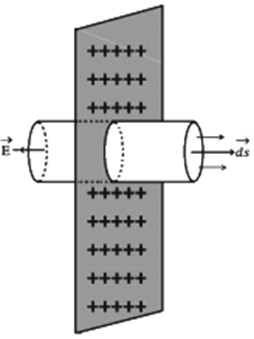 on both sides of the sheet. Let a point be at a distance a from the sheet at which the electric field is required.

The gaussian cylinder is of area of cross section A.

Area of the cross section of the gaussian cylinder.
Here, electric lines of force are parallel to the curved surface area of the cylinder, the flux due to the electric field of the plane sheet of charge passes only through two circular sections of the cylinder.

According to Gauss's Theorem,

The direction of electric field for positive charge is in the outward direction and perpendicular to the plane of infinite sheet.

Direction of electric field for negative charge is in the inward direction and perpendicular to the sheet.

ii) Given: Two capacitors are in the ratio of 1:2.

When the capacitors are connected in parallel,

Energy stored in the capacitor,

When the capacitors are connected in series,

Energy stored in the capacitor,

Given that, energy stored in both the cases is same.

(a) Explain the meaning of the term mutual inductance. Consider two concentric circular coils, one of radius r1 and the other of radius r2 (r1 < r2) placed coaxially with centres coinciding with each other. Obtain the expression for the mutual inductance of the arrangement.

(b) A rectangular coil of area A, having number of turns N is rotated at ‘ f ’ revolutions per second in a uniform magnetic field B, the field being perpendicular to the coil. Prove that the maximum emf induced in the coil is 2

a) Mutual induction is the property of a pair of coils due to which an emf induced in one of the coils is due to change in the current in the other coil.

Consider two circular coils S1 and S2 of the same length l, such that both their centres coincide with each other.

M21 is the coefficient of mutual induction of the two coils.

When current is passed through S1 an emf is induced in S2.

Magnetic field produced inside S1 on passing current through it is given by,

Magnetic flux linked with each turn of S2 will be equal to B1 times the area of cross section of S1.

Magnetic flux linked with each turn of S2 = B1A

Total magnetic flux linked with each turn of the S2 is,

Similarly, mutual induction between the two coils, when current is passed through coil S2 and induced emf is produced in coil S1 is given by,

Hence, coefficient of mutual induction between the two coil will be,

b) Flux is given by, 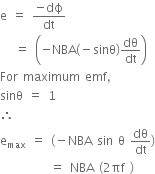 (a) Draw a labelled ray diagram to obtain the real image formed by an astronomical telescope in normal adjustment position. Define its magnifying power.

(i) Which lenses should he used as objective and eyepiece ? Justify your answer.

ii) Why is the aperture of the objective preferred to be large?

a) The image formed by an astronomical telescope in normal adjustment position is given below, In normal adjustment, the image is formed at infinity.

Mathematically, it is given by

i) The formula for magnification, M =

Therefore, an objective with power = 0.5 D and eyepiece of power 10 D should be used.

This choice would give a higher magnification.

ii) The aperture is preferred to be large so that the telescope can collect maximum amount of light coming from the distant object.
3426 Views