1. According to Rutherford model, an electron orbiting around the nucleus continuously radiates energy due to the acceleration; hence the atom will not remain stable.
2. As electron spirals inwards; its angular velocity and frequency change continuously; therefore it will emit a continuous spectrum.

When a charged particle (q) moves inside a magnetic field B with velocity v, it experiences a force F = q(v xB) when v is perpendicular to B, the force F on the charged acts as the centripetal force and makes it move along a circular path.
Let m be the mass of particle and r is radius  of circular path

ii) No, The mass of the two particles, i.e deuteron and proton, is different.Since (cyclotron) frequency depends inversely on the mass, they cannot be accelerated by the same oscillator frequency.

A wire whose cross-sectional area is increasing linearly from its one end to the other, is connected across a battery of V volts.
Which of the following quantities remain constant in the wire?
(a) drift speed
(b) current density
(c) electric current
(d) electric field

The electric current will remain constant in a wire whose cross-sectional area is increased linearly from its one end to the other, is connected across a battery of V volts.

Because current is the only quantity that does not depend on the area of cross- sections of the wire.
I=dq/dt, that is the rate of flow of charge, where as drift speed, current density and electric field depending on the increasing area of the cross-section of the following relations:

3682 Views
14. Find out the wavelength of the electron orbiting in the ground state of the hydrogen atom.

It is the distance of charged particle from the centre of the nucleus, at
which the whole of the initial kinetic energy of the (far off) charged
particle gets converted into the electric potential energy of the system.
Distance of closest approach (rc) is given by

(ii) Space wave mode of propagation: In the frequency range 30 MHz to 1000 Mhz, the wavelengths are in the range of 30 cm to 10 m. At these wavelengths the diffraction of waves is high and the waves lose their directional property. So frequency range of 5.925 - 6.425 GHz is used in satellite communication.

Name the junction diode whose I-V characteristics are drawn below 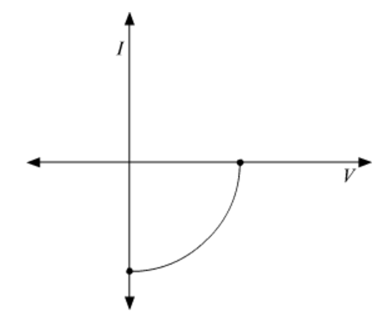 Diffusion and Drift are the two processes that take place in the formation of a p-n junction. Barrier potential is formed due to loss of electrons from n-region and gain of electrons by p-region. Its polarity is such that it opposes the movement of charge carriers across the junction.

A circular coil of cross-sectional area 200 cm2 and 20 turns is rotated about the vertical diameter with angular speed of 50 rad s−1 in a uniform magnetic field of magnitude 3.0 × 10−2T. Calculate the maximum value of the current in the coil.

So, for maximum emf sinωt in e = NAB ω sinωt should be 1.

Since resistance of the circular loop is not given, let us consider its resistance to be R.

Therefore, current I in the coil is