Explain any three constraints on the American power.

The conflict of 1962, in which India suffered military reverses, had long-term implications for India-China relations. Diplomatic relations between the two countries were downgraded until 1976. Thereafter, relations the two countries began to improve slowly. After the change in China’s political leadership from the mid to late 1970s. China’s policy became more and more pragmatic and less ideological. So it was prepared to put off the settlement of contentious issues while improving relations with India. A series of talks to resolve the border issues were also initiated in 1981.

Study the paragraph given above carefully and answer the following question:

(i) Why did India suffer military reverses as a result of the conflict of 1962?

(ii) When did the relation between India and China Slowly improve ?

(iii) What was the change in the policy of China in the seventies?

(iv) Which efforts were made to resolve the border issue between India and China?

The constraint on the American power are:

(i) The first constraint is the institutional architecture of the American State itself. A system of division of powers between the three branches of the government places significant brakes upon the unrestrained exercise of America‘s military power by executive branch.

(ii) The second constraint on American power is also domestic in nature, and stems from the open nature of American Society. There is nevertheless a deep skepticism regarding the purposes and methods of government in American Political culture.

(iii) The constraint on the US is perhaps the most important. There is only one organisation in the international system that could possibly moderate the exercise of American Power today, and that is NATO.

(i) Because of naive assessment of the Chinese intentions and lack of military preparedness.

(ii)  The relation between India and China Slowly improve in 1981.

(iv) A series of talks to resolve the border issues were initiated.

What is cold war? Why did the Super Powers depend on military alliances with smaller countries?

Explain any six consequences of the disintegration of the Soviet Union.

The Cold War referred to the competition, the tensions and series of confrontations between the United States and Soviet Union, backed by their respective allies.

The Super Powers depend on military alliances with smaller countries because the smaller states were helpful for the superpowers in gaining access to:

(i)  Vital resources such as oil or minerals

(ii)  Territory, from where the superpowers could launch their weapons and troops.

(iii)  Location from where they could spy on each other.

(iv)  Economic support, in that many small allies together could to pay for military expenses.

The consequences of the disintegration of the Soviet Union are:

(i) It meant the end of Cold War confrontations.

(ii) The ideological dispute over whether the socialist system would beat the capitalist system was not an issue any more.

(iii) Power relations in the world politics changed and, therefore, the relative influence of ideas and institutions also changed.

(iv) Politically, the notion of liberal democracy emerged as the best way to organise political life.

(v) The end of Soviet bloc meant the emergence of many new countries.

(vi) The central Asian countries wanted to take advantage of their geographical locations and continue their close ties with Russia and also to establish ties with the West, the US, China and others.

Evaluate any three factors that helped the congress to continue to dominate the Indian political scenario for almost three decades after independence.

What was Green Revolution? Mention it’s any two positive and any two negative consequences.

The factors that helped the congress to continue to dominate the Indian political scenario for almost three decades after independence are:

(i) It had inherited the legacy of national movement. The Congress was the only party to have organization spread all over the country.

(iii) The party had Jawaharlal Nehru the most popular and charismatic leader in Indian politics. He led the congress campaign and toured through the country.

(iv) Congress was all inclusive- a social and ideological coalition and had transformed into a rainbow-like social coalition, which accommodated the revolutionary as well as pacifist.

Green Revolution was a policy of putting more resources into those areas which already had irrigation and those farmers who were already well-off to help increase production rapidly in the short run. In this, high- yielding variety seeds, fertilizers, pesticides and better irrigation at highly subsidised prices offered.

(i) The green revolution delivered agricultural growth with a rise in wheat production.

(ii) It raised the availability of food in the country.

(i) Some regions like Punjab and Western Uttar Pradesh became agriculturally prosperous, while others remained backward.

(ii) It resulted in the rise of what is called the middle peasant sections.

How have popular movements contributed to the expansion of democracy rather than causing disruption? 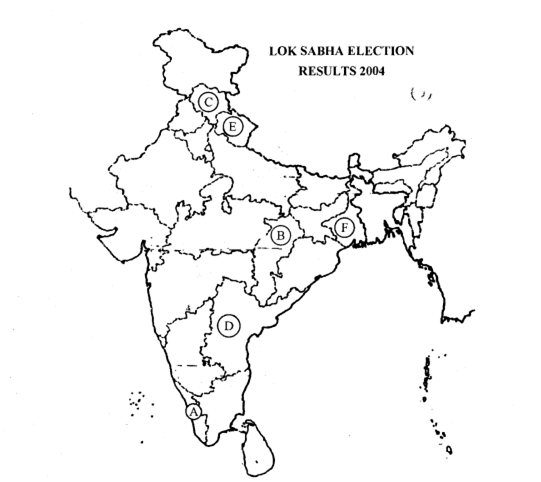 In the given political outline map of India, six states have been labelled as A, B, C, D, E, and F, Keeping in mind, the Lok Sabha Election result of 2004 and with the help of the information provided below, Identify these states. Write their correct names in your answer book in the following tabular form:


(i) Two states where the Left parties won the majority of Lok Sabha seats.

(ii) Two states where the NDA won the Majority of Lok Sabha seats.

(iii) Two states where the UPA won the majority of seats in Lok Sabha.

(i) They represent new social groups whose economic and social grievances were not redressed in the realm of electoral politics.

(v) The movements make people aware of their rights and the expectations that they can have from democratic institutions.

(vi) The frequency and the methods used by the movements suggest that the routine functioning of democracy did have enough space for the voices of these social groups.

(i) Two states where the Left parties won the majority of Lok Sabha seats are Kerala and West Bengal.

(ii) Two states where the NDA won the Majority of Lok Sabha seats are Madhya Pradesh and Rajasthan.

(iii) Two states where the UPA won the majority of seats in Lok Sabha are Andhra Pradesh and Assam.

Explain any six factors which led to the popularity of Indira Gandhi’s government in the Early 1970s.

‘The 1977 elections for the first time saw the opposition coming to power at the centre’. Examine any six reasons for this change.

The factors which led to the popularity of Indira Gandhi’s government in the Early 1970s are:

(i) After its massive victory in the 1971, Indira Gandhi amended the constitutions to remove legal obstacles for abolition of privy purse.

(ii) She focused on the growth of the public sector.

(iv) Through ‘Garibi Hatao’ she had generated a support base among the disadvantaged, Dalits, Adivasis and minorities.

(vi) The characteristic features of statesman and strong nationalist leader.