What is light? Mention its two important uses.

Light: Light is a form of electromagnetic radiation (radiant energy) which makes things visible. When the light rays falls on objects, it is reflected back and enters our eyes. This produces the sensation of vision and hence, we are able to see the objects around us.

1. Light enables us to see even through a transparent medium because light is transmitted through it.

2. Light makes things around us visible.

2. Light is highly useful in modern communication. We can transmit thousands of telephonic conversations simultaneously via optical fibres over long distances.

3393 Views
What are real and virtual images? Can these images be obtained on a screen? Give reasons in support of your answer.

Real image: If a beam of rays starting from a point source of light, after reflection or refraction, actually converges to a point, then the second point is called the real image of the first.
A real image is formed due to actual intersection of rays, so it can be obtained on a screen.
It is usually inverted.
e.g., The images formed on a cinema screen are real images.

Virtual image: If a beam of rays starting from a point source of light, after reflection or refraction, appears to diverge from another point, then the second point is called the virtual image of the first.
A virtual image is not formed due to the actual intersection of the rays, so it cannot be obtained on a screen.
Virtual image is usually erect.
e.g. The image of our face in a looking glass is a virtual image.

754 Views
Define a ray of light and a beam light. What are the different types of beams of light? 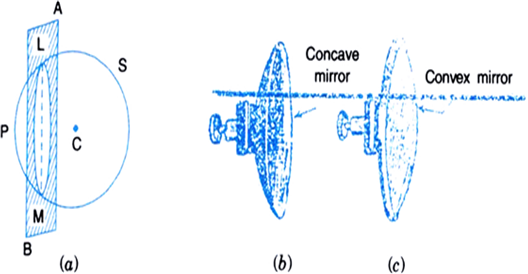 Fig.(a) A spherical shell cut by a plane surface, (b) concave mirror, and (c) convex mirror.
(ii) Convex mirror: A spherical mirror is convex if it is silvered on the inner hollow surface and reflects light from the outer bulged surface.[Fig. (c)]

Define the following terms in connection with reflection of light:
Incident ray, reflected ray, point of incidence, normal, angle of incidence and angle of reflection.

Incident ray: The ray of light that falls on the reflecting surface is called incident ray.

Reflected ray: The ray that bounces back from the reflecting surface, after reflection from it is called reflected ray.

Normal: The line which is drawn perpendicular to the reflecting surface, at the point of incidence is called the normal at that point.

Angle of incidence: It is the angle between the incident ray and the normal to the reflecting surface at the point of incidence. It is denoted reflection by i.

Angle of reflection: It is the angle between the reflected ray and the normal to the reflecting surface at the point of incidence. It is denoted by r.


592 Views
Briefly discuss the various theories about the nature of light.

Some of the main theories are as follows:

1. Corpuscular theory of light: Newton, the great among the greatest, proposed in 1675 A.D. that light consists of tiny particles called corpuscles which are shot out at high speed by a luminous object. This theory could explain the reflection, refraction and rectilinear propagation of light.

2. Wave theory of light wave: In 1678, Dutch scientist Christian Huygens, suggested that light travels in the form of longitudinal waves just as sound propagates through air. Later on, Fresnel and Young showed that light propagates as a transverse wave. This successfully explained the reflection, refraction as well as interference, diffraction and polarisation of light waves.

3. Electromagnetic nature of light waves: In 1873, Maxwell suggested that light propagates as electric and magnetic field oscillations. These are called electromagnetic waves which require no medium for their propagation. Also, these waves are transverse in nature.

4. Planck’s quantum theory of light: According to Max Planck, light travels in the form of small packets of energy called photons. In 1905, Albert Einstein used this theory to explain photoelectric effect (emission of electrons from a metal surface when light falls on it).

5. De-Broglie's hypothesis: De Broglie suggested that light has a dual nature, i.e., it can behave as particles as well as waves.

So, we see that in phenomena like interference, diffraction and polarisation, light behaves as a wave while in photoelectric effect, it behaves a particle.