A concave lens of focal length 15 cm forms an image 10 cm from the lens. How far is the object placed from the lens? Draw the ray diagram.

Drawing the ray diagram: Using a scale of 1: 5, we get v = - 2 cm, f = - 3 cm. We draw the ray diagram as follows:
(i) Draw the principal axis (a horizontal line).
(ii) Draw a convex lens, keeping principal centre (C) on the principal axis.
(iii) Mark points F and B on the left side of lens at a distance of 3 cm and 2 cm respectively.
(iv) Join any point D (nearly at the top of lens) and F by a dotted line.
(v) Draw a line AD, parallel to principal axis. 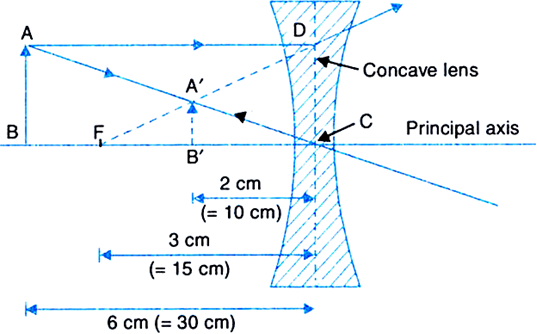 445 Views
The radius of curvature of a spherical mirror is 20 cm. What is its focal length?

Relationship between radius and focal length is as :


is the focal length of the mirror.

Name a mirror that can give an erect and enlarged image of an object.

Concave mirror has the property of giving an erect and enlarged image of an object.
468 Views
Advertisement

Why do we prefer a convex mirror as a rear-view mirror in vehicles?

Uses of convex mirrors: Drivers use convex mirror as a rear-view mirror in automobiles because of the following two reasons:
1. A convex mirror always forms an erect, virtual and diminished image of an object placed anywhere in front of it.
2. A convex mirror has a wider field of view than a plane mirror of the same size, as shown in Fig.
Thus convex mirrors enable the driver to view much larger traffic behind him than would be possible with a plane mirror. The main disadvantage of a convex mirror is that it does not give the correct distance and the speed of the vehicle approaching from behind. Fig. Field of view of (a) a plane mirror (b) a convex mirror