Draw the structure of a neuron and explain its function.

Diagram of a neuron to show its structure: 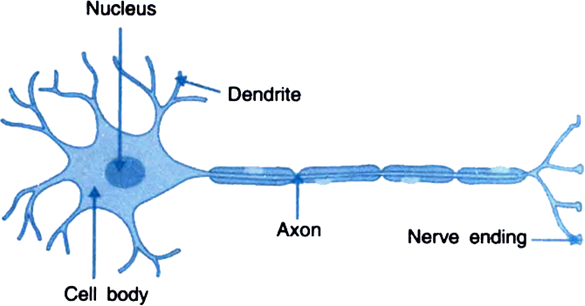 Fig. Structure of a neuron

Function: Dendrites of a neuron collect information from the receptors and pass it to the cell body in the form of electrical impulse. From the cell body impulse passes along the axon to its end. At end of the axon, the electrical impulse sets off the release of certain chemicals (chemical neurotransmitters). These cemicals cross the gap (synapse) between the endings of the axon and dendrites of the next neuron and start a similar electric impulse in the dendrites. Thus information received travels along the neurons of a nerve to the effector muscles or gland. On reaching to the desired muscle or gland, axon endings from Neuromuscular junction (synapse between axon endings and muscle cells) through which information delivered from neuron to muscles or glands.

The gap between two neurons is called a

189 Views
Which of the following is a plant hormone?

Cytokinin
96 Views
What is the difference between the manner in which movement takes place in a sensitive plant and the movement in our legs?
Movement in sensitive plant: The movement in sensitive plant leaves takes place in response to touch (shock) stimulus. When terminal pinnule is touched, the stimulus is conducted to its base and the pinnules droop down. This happen in change in osmotic pressure (decrease) causing shrinkage. When the stimulus time is over, osmotic pressure increases and the cells swell, the pennules become normal. This is an example of growth independent movement.


Thus, movement happens at a point different from the point of touch (stimulus). So, the information that a touch has occurred communicated through electrical-chemical means from cell to cell, but not through specialised tissues. Plant cells change in shape by changing amount of water in them, resulting in swelling or shrinking, during movement.

Movement in our legs: Our legs are provided with nerves which have connection with muscles. To lift the leg, the brain passes information to nerves.

The information travels as an electrical impulse. On reaching leg muscles impulse is converted into a chemical signal and the muscles contract to lift the leg. Movement of legs takes place due to muscle contraction and relaxation which is under the control of our nervous system.

When nerve impulse reaches the muscle cells move by changing their shape. Special proteins cause both change in shape and their arrangement in the cell in response to nervous electrical impulses.


313 Views
Compare and contrast nervous and hormonal mechanisms for control and coordination in animals.
261 Views