system of particles and rotational motion

System of Particles and Rotational Motion

A body at rest explodes in three fragments. What is the velocity of the centre of mass of exploded part?
Zero.

In the absence of external force, the centre of mass moves with constant velocity. Since before explosion the body was at rest, therefore, the velocity of the centre of mass is zero before an explosion. Hence it will also be zero after the explosion.
919 Views
(a) Prove the theorem of perpendicular axes.

(Hint: Square of the distance of a point (x, y) in the x–y plane from an axis through the origin perpendicular to the plane is (x2 + y2).

A physical body with centre O and a point mass m,in the x–yplane at (x, y) is shown in the following figure below. 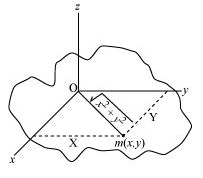 Moment of inertia about y-axis, Iy = my2

Hence, the theorem is proved. 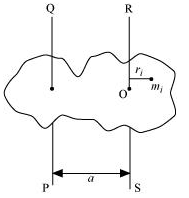 Suppose a rigid body is made up of n particles, having masses m1, m2, m3, … , mn, at perpendicular distances r1,r2, r3, … , rn respectively from the centre of mass O of the rigid body.

The moment of inertia about axis RS passing through the point O, 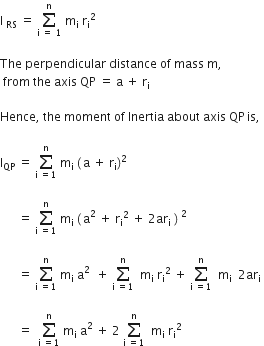 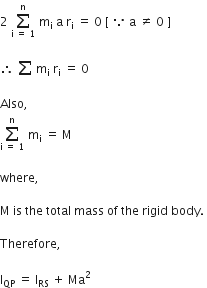 Thus the theorem is proved.


165 Views
Two discs of moments of inertia I1 and I2 about their respective axes (normal to the disc and passing through the centre), and rotating with angular speeds ω1 and ω2 are brought into contact face to face with their axes of rotation coincident. (a) What is the angular speed of the two-disc system? (b) Show that the kinetic energy of the combined system is less than the sum of the initial kinetic energies of the two discs. How do you account for this loss in energy? Take ω1 ≠ ω2.
(a) Moment of inertia of disc I= I1

Angular speed of disc I = ω1

Moment of inertia of disc II = I2

When the two discs are joined together, their moments of inertia get added up.

Let ω be the angular speed of the system.

Using the law of conservation of angular momentum, we have

When the discs are joined, their moments of inertia get added up.

Angular speed of the system = ω

Final kinetic energy is given by,

Solving the equation, we get

All the quantities on RHS are positive

When the two discs come in contact with each other, there is a frictional force between the two. Hence there would be a loss of Kinetic Energy.

m = Mass of the body

R = Radius of the body

K = Radius of gyration of the body

v = Translational velocity of the body

h =Height of the inclined plane

g = Acceleration due to gravity

Total energy at the top of the plane, E­1= mgh

Total energy at the bottom of the plane, Eb = KErot + KEtrans

)
From the law of conservation of energy, we have

238 Views
A disc rotating about its axis with angular speed ωois placed lightly (without any translational push) on a perfectly frictionless table. The radius of the disc is R. What are the linear velocities of the points A, B and C on the disc shown in Fig. 7.41? Will the disc roll in the direction indicated? 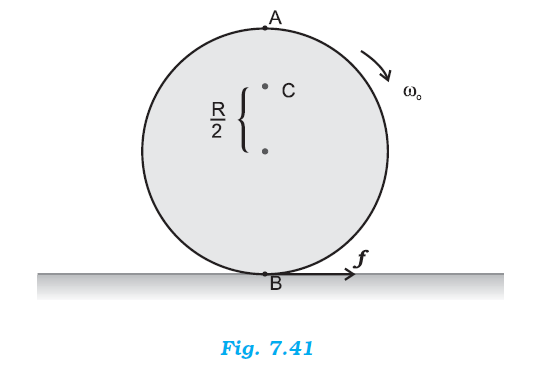 Angular speed of the disc = ωo

Radius of the disc = R

vA = Rωo, in the direction tangential to the right.

vB = Rωo, in the direction tangential to the left.

ωo, in the direction same as that of vA.

ω0
The disc will not roll.

The directions of motion of points A, B, and C on the disc are shown in the following figure 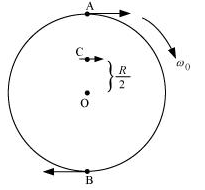 Since the disc is placed on a frictionless table, it will not roll. This is because the presence of friction is essential for the rolling of a body.