What is genetic engineering ?
Genetic engineering is a technique for artificially and deliberately modifying DNA (genes) to suit human needs. It is used to change the genetic makeup of the cells by using Recombinant DNA technology
1228 Views
What is PCR? List the three main steps. Show the steps with a diagrammatic sketch.

PCR is Polymerase Chain Reaction. It is used to amplify the DNA that is make multiple copies of the desired DNA  'in vitro' using DNA polymerase and two  sets of primers.

Three main  steps of PCR are-
1. Denaturation- where the DNA strands are heated so that the two strands separate and form single strands to which primer can attach.
2. Primer annealing - in this step the primer attach to the complementary strands on the single stranded DNA.
3. Extension of primers- DNA polymerase extends the primers and forms double stranded DNA. Genetic engineering is a technique for artificially and deliberately modifying DNA (genes) to suit human needs. It includes techniques like creating recombinant , gene cloning and gene transfer.
Steps in genetic engineering:
1. Identification and isolation of genetic material.
2. Cutting of the DNA at specific locations using restriction enzymes.
3. Amplification of the desired gene using Polymerase Chain reaction.
4. Introduction of gene of interest  into host cell or organism.
5.The gene is cloned and the desired gene product the recombinant protein is obtained.
6. Downstream processing is done which includes processing like and separation purification
5. 1. Identification and isolation of the desired gene or DNA fragment to be cloned.

2. Insertion of the isolated gene in a suitable vector.

3. Introduction of vector into a suitable organism / host cell.

5. Multiplication or cloning of the introduced gene in the host organism.

List the features required in vectors that  facilitate cloning . With a suitable diagram show the E.coli cloning vector with  restriction sites.

Features  required  in vectors that facilitate cloning  are :
1. Origin of replication (Ori) which helps in autonomous replication and also controls the copy number.
2. Selectable marker which helps in isolation of transformed cell.
3. Cloning sites which provide sites at which foreign DNA can be inserted . These sites also help in selection of recombinants.
4. Vectors like Agrobacterium tumefaciens ( in plants) and retroviruses (in animals) can be made non pathogenic and be used to fascilitate cloning. 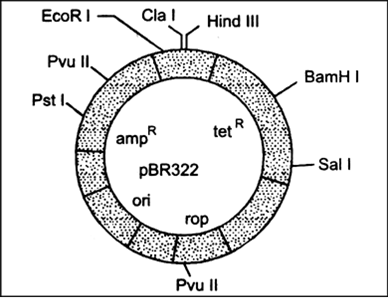 
1. The bacterial cells are made competent to take up recombinant DNA by treating them with a specific concentration of calcium, that increases the efficiency with which DNA enters the cell through the pores in its cell wall.

2. Microinjection is a method in which the recombinant DNA is directly injected into the nucleus-of the animal cell with the help of mirco-needles or micropipettes.

3. Gene gun or biolistics is a method suitable for plant cells, where plant cells are bombarded with high-velocity microparticles of gold or tungsten coated with DNA.

4. Disarmed pathogens can be  allowed to infect the host cell,  which then transfer the recombinant DNA into the host.

5. Electroporation in which electricity is applied to create transient pores in the host cell so that it takes up Recombinant DNA with ease.