Through The Eyes Of Travellers

Through The Eyes Of Travellers

How had Bernier described a complex social reality of the artisans under the Mughals. Give any one reason.

Bernier felt that artisans had no incentive to improve the quality of their manufactures, since profits were appropriated by the state. Manufactures were, consequently everywhere in decline. At the same time, he conceded that vast quantities of the world's precious metals flowed into India, as manufactures were exported in exchange for gold and silver. He also noticed the existence of a prosperous merchant community, engaged in long-distance exchange.

Name the book written by Al-Biruni. Explain briefly the method adopted by him for writing the book.

Name of the Al-Biruni’s book was Kitab-ul-Hind, written in Arabic.

It is simple and lucid. It is a voluminous text, divided into 80 chapters on subjects such as religion and philosophy, festivals, astronomy, alchemy, manners and customs, social life, weights and measures, iconography, laws and metrology.

Generally (though not always), Al-Biruni adopted a distinctive structure in each chapter, beginning with a question, following this up with a description based on Sanskritic traditions, and concluding with a comparison with other cultures. Some present-day scholars have argued that this almost geometric structure, remarkable for its precision and predictability.

Francois Bernier, a Frenchman, was a doctor, political philosopher and historian. Like many others, he came to the Mughal Empire in search of opportunities. Bernier travelled to several parts of the country and wrote account of what he saw, frequently comparing what he saw in India with the situation in Europe.

The question of land ownership or landed property : (i) According to Bernier, one of the fundamental differences between Mughal India and Europe was the lack of private property in land in the former. He was a firm believer in the virtues of private property, and saw crown ownership of land as being harmful for both the state and its people.

As an extension of this, Bernier described Indian society as consisting of undifferentiated masses of impoverished people, subjugated by a small minority of a very rich and powerful ruling class.

(ii) Bernier’s descriptions influenced Western theorists from the eighteenth century onwards. The French philosopher Montesquieu, for instance, used this account to develop the idea of oriental despotism, according to which rulers in Asia (the Orient or the East) enjoyed absolute authority over their subjects, who were keptin conditions of subjugation and poverty, arguing that all land belonged to the king and that private property was non-existent.

As in the case of the question of landownership, Bernier was drawing an oversimplified picture. There were all kinds of towns : manufacturing towns, trading towns, port towng sacred centres, pilgrimage towns etc.

Explain Al-Biruni’s description of the caste system in India.

Al-Biruni had explained the caste system of India. He did not consider the unique as such social divisions were prevalent in ancient Persia. He accepted the Brahmanical description of the caste system. But he did not accept the notion of pollution. He stated that the state of impurity does not remain for ever. It soon regains its original condition of purity. The sun cleanses the air. The salt in the sea prevents the water from being polluted. But he finds social pollution as contrary to the laws of nature.

Thus we see that Al-Biruni’s description of the caste system was deeply influenced by his study of normative Sanskrit books and the views of Brahmans. However he did not find the system as rigid. For example, the categories like antyaja (born outside the system) provided inexpensive labour to both peasants and Zamindars. Though such classes were socially oppressed yet they were included in the economic network.

How had Ibn Battuta describe the coconuts like a man's head?

The following is how Ibn Battuta described the coconut: 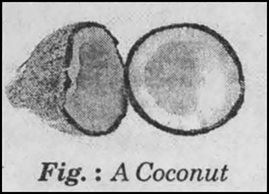 These trees are among the most peculiar trees in kind and most astonishing in habit. They look exactly like date-palms, without any difference between them except that the one produces nuts as its fruits and the other produces dates. The nut of a coconut tree resembles a man's head, for in it are what look like two eyes and a mouth, and the inside of it when it is green looks like the brain and attached to it is a fibre which looks like hair. They make from this cords with which they sew up ships instead of (using) iron nails, and they (also) make from it cables for vessels.

Name the work written by Bernier. What did he write about sati system?

The name of the work written by Bernier is Travels in the Mughal Empire.

The description given by Bernier about Sati System:

He noted that while some women seemed to embrace death cheerfully, others were forced to die. Here we are quoting the description given by Bernier about the child sati at the time of his visit to India. According to several historians this is perhaps one of the most poignant descriptions by Bernier:

At Lahore, I saw a most beautiful young widow sacrificed, who could not, I think, have been more than twelve years of age. The poor little creature appeared more dead than alive

when she approached the dreadful pit. The agony of her mind cannot be described. She trembled and wept bitterly, but three or four of the Brahmanas, assisted by an old woman who held her under the arm, forced the unwilling victim towards the fatal spot, seated her on the wood, tied her hands and feet, lest she should run away, and in that situation the innocent creature was burnt alive. I found it difficult to repress my feelings and to prevent their bursting forth into clamorous and unavailing rage.