When electron in hydrogen atom jumps from energy state ni =4 to nf =3, 2, 1, identify the spectral series to which the emission lines belong.

According to Bohr’s postulates, in a hydrogen atom, a single electron revolves around a nucleus of charge +e. For an electron moving with a uniform speed in a circular orbit on a given radius, the centripetal force is provided by the Coulomb force of attraction between the electron and the nucleus.

Potential energy is given by, P.E =

, is the total energy.

For nth orbit, E can be written as En,

... (2)
Now, using Bohr's postulate for quantization of angular momentum, we have

Putting this value of v in equation (1), we get

Now, putting value of rn in equation (2), we get 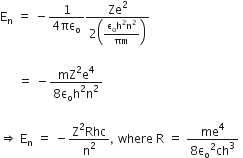 R is the rydberg constant.

The radiation corresponding to 3 → 2 transition of hydrogen atom falls on a metal surface to produce photoelectrons. These electrons are made to enter a magnetic field of 3 x 10-4 T. If the radius of the largest the circular path followed by these electrons is 10.0 mm, the work function of the metal is close to:

Hydrogen (1H1), deuterium (1H2), singly ionised helium (2He4+) and doubly ionised lithium (3Li8)2+ all have one electron around the nucleus. Consider an electron transition from n =2 to n=1. If the wavelengths of emitted radiation are λ1,λ2,λ3 andλ4, respectively for four elements, then approximately which one of the following is correct?

As an electron makes a transition from an excited state to the ground state of a hydrogen – like atom/ion:

In a hydrogen like atom, electron makes the transition from an energy level with quantum number n to another with a quantum number (n – 1). If n >> 1, the frequency of radiation emitted is proportional to