1109 Views
What is the difference between physisorption and chemisorption?
Answer: 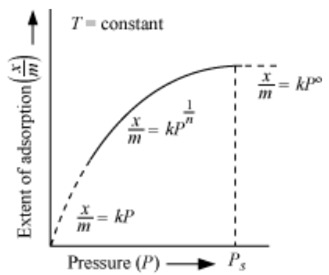 Freundlich Isotherm: The relationship between x/m and pressure of the gas at constant temperature is called adsorption isotherm and given as by

and n depend upon the nature of gas and the solid.


At low pressure, the extent of adsorption is directly proportional to pressure (raised to power one).

At high pressure, the extent of adsorption is independent of pressure (raised to power zero).

Therefore at an intermediate value of pressure, adsorption is directly proportional to pressure raised to power 1/n.Here n is a variable whose value is greater than one.

Using constant of proportionality, k, also known as adsorption constant we get

The above equation is known as Freundlich adsorption equation.

As per Freundlich adsorption equation

Taking logarithm on both sides, we get

Here x is the weight of the gas absorbed by m mass of the adsorbent at a pressure p, k and n are constant (at a particular temperature) and for a particular adsorbate-adsorbent pair.

Plotting a graph between log(x/m) and log p, we will get a straight line with the value of slope equal to 1/n and log k as y-axis intercept. 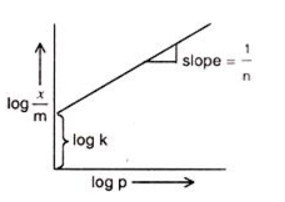 765 Views
Discuss the effect of pressure and temperature on the adsorption of gases on solids.

(ii) For a high pressure range the extent of adsorption of a gas per unit mass of the adsorbent (x / m) is independent of the applied pressure. That is

(iii) For a moderate pressure range the value of x/m is proportional to a Fractional power of pressure. That is

(where T is constant)
where 1 / n is a fraction. Its value may be between 0 and 1. Fig. (a) and (b) show the variations of the extent of adsorption of a gas on an adsorbent as predicted by Frundlich equations (i) and (ii) respectively.
...(i)


177 Views
How are the colloidal solutions classified on the basis of physical states of the dispersed phase and dispersion medium?

Answer:
A dispersed phase or dispersion medium in colloidal solution may be a solid, liquid or gas. Based on physical states, 8 types of colloidal systems are possible (gas in gas is not possible as gases are always miscible in all proportions forming homogeneous mixure). All other takes of combinations of gases, liquids and solids may exist as colloidal solutions. Examples are given in the following table:

218 Views
Distinguish between the meaning of the terms adsorption and absorption. Give one example of each.
Answer: