How is E.coli used to produce human insulin?

Dr Saran Narang, a scientist of Indian origin, working in Ottawa, Canada was involved in cloning of insulin gene.

1. Isolation of Donor or DNA segment. A useful DNA segment is isolated from the donor organism. 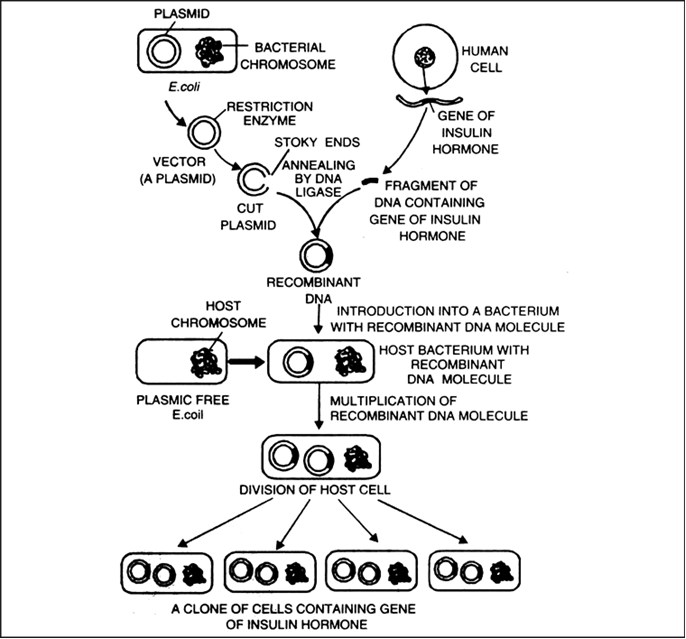 Steps involved in gene transfer for the production of human insulin.

(a) Single cell proteins (SCP). are protein derived from single celled organism and used as a food suplement.


(b) Biopatent. is a patent right granted for a invention in the field of biology by a Government to an inventor to prevent others to make commercial use of their invention.

(c) Bioethics. Bioethics is the study of ethical issues that come up  with the advances in the field  of  biology

(d) Biopiracy. Exploitation of  biological resource  by others without proper permission and without providing compensation from the people or country concerned.

1. The specific genes  from the parasite are introduced into the plant using Agrobacterium as the vector.

2. The introduced gene produces both sense/coding RNA and antisense RNA .

4. This ds RNA initiates RNAi and silences the mRNA of the nematode.

How insulin is synthesised in human (or mammals) . Give a suitable diagram?

(1) Insulin is made up of two short polypeptide chains; A and chain B which are linked together by disulphide bridges.

Conversion of pro-insulin after removal of C-peptide.

(2) Insulin is synthesised as pro-hormone (i.e. which is to be processed before becoming functional) which contains an extra stretch called C-peptide which is usually removed during maturation of insulin.