Motion in A Plane

A point particle of mass m, moves along the uniformly rough track PQR as shown in the figure. The coefficient of friction, between the particle and the rough track equals µ. The particle is released, from rest, from the point P and it comes to rest at a point R. The energies, lost by the ball, over the parts, PQ and QR, of the track, are equal to each other, and no energy is lost when particle changes direction from PQ to QR. The values of the coefficient of friction µ and the distance x(=QR), are, respectively close to : 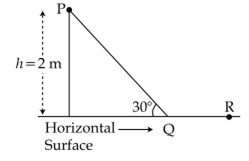 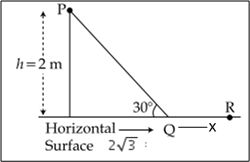 A particle is moving with velocity,

where K is a constant. The general equation for its path is

The velocity of the particle,

A particle of mass m is at rest at the origin at time t = 0. It is subjected to a force F (t) = F0e–bt in the x direction. Its speed v(t) is depicted by which of the following curves?

So, velocity increases continuously and attains a maximum value of v= F/mb as t ∞
614 Views
4.

Maximum speed with which the boy can throw stone is

Range is maximum when projectile is thrown at angle of 45o, Thus,

The figure shows the position –time (x – t) graph of one–dimensional motion of a body of mass 0.4 kg. The magnitude of each impulse is

From the graph it is a straight line, so uniform motion. Because of impulse direction of velocity changes as can be seen from the slope of the graph.
(∴ impulse (l) = f x t
⇒ I  = mat

An object moving with a speed of 6.25m/s, is decelerated at a rate given by dv/dt =- 2.5√v, where v is the instantaneous speed. The time taken by the object, to come to rest, would be

A particle of mass m is moving along the side of a square of side ‘a’, with a uniform speed v in the x-y plane as shown in the figure:

Which of the following statements is false for the angular momentum → L about the origin?

For a particle of mass, m is moving along the side of a square a. Such that
Angular momentum L about the origin 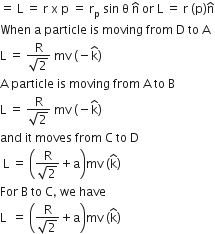 A roller is made by joining together two cones at their vertices O. It is kept on two rails AB and CD which are placed asymmetrically (see figure), with its axis perpendicular to CD and its centre O at the centre of line joining AB and CD (see figure). It is given a light push so that it starts rolling with its centre O moving parallel to CD in the direction shown. As it moves, the roller will tend to: 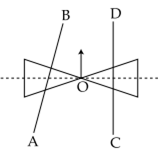 As, the wheel rolls forward the radius of the wheel, decreases along AB hence for the same number of rotations it moves less distance along AB, hence it turns left.

Four particles, each of mass M and equidistant from each other, move along a circle of radius R under the action of their mutual gravitational attraction. The speed of each particle is

Net force acting on any one particle M,
= 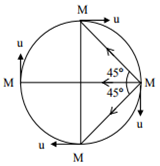 This force will equal to centripetal force
So,

A projectile is given an initial velocity of

where is along the ground and

the equation of trajectory of the projectile