What are demand deposits?

Demand Deposits also known as Current Account deposits refer to those deposits that provide the depositor the liberty to withdraw money at any point of time. That is, the account holder of the demand deposits can demand these deposits at any point of time as per their discretion and convenience. Such deposits do not offer any rate of interest.

Explain the three properties of the indifference curves. 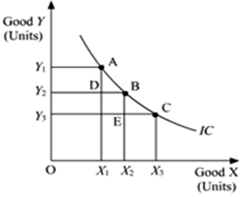 In other words, the indifference curve is relatively flatter in its right hand portion and relatively steeper in its left-hand portion. This is because as the consumers consume more and more of one good, the marginal utility good fall. In other words, the consumer is willing to sacrifice less and less for each additional unit of the other good consumed. Thus, as we move down the IC, MRS diminishes. This suggests the convex shape of indifference curve.
3) Slope of IC: The Slope of an IC is given by the Marginal Rate of Substitution (MRS). Marginal rate of substitution refers to the rate at which a consumer is willing to substitute one good for each additional unit of the other good.

Why are the firms said to be interdependent in an oligopoly market? Explain.

What happens to the demand of a good when consumer's income changes? Explain.

Income of consumer is an important determinant of demand. The rise and fall of the demand for a good as per the rise in income of consumers depends upon the nature of good. Normal goods have a positive income elasticity of demand, so as consumers' income rises, more will be the demand. A rise in the income of the consumer will increase the demand for the good. In the case of Luxury goods and services, demand rises more than proportionate to a change in income. Inferior goods have a negative income elasticity of demand meaning that demand falls as income rises.

Market of a commodity is in equilibrium. Demand for the commodity "increases." Explain the chain of effects of this change till the market again reaches equilibrium. Use diagram. 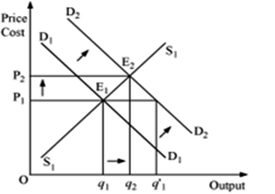 Here,
D1D1 and S1S1 represent the market demand and market supply respectively. The initial equilibrium occurs at E1, where the demand and the supply intersect each other. Due to the increase in the demand for the commodity, the demand curve will shift rightward parallel fromD1D1 to D2D2, while the supply curve will remain unchanged. Hence, there will be a situation of excess demand, equivalent to (q1' − q1). Consequently, the price will rise due to excess demand. The price will continue to rise until it reaches E2 (new equilibrium), where D2D2 intersects the supply curve S1S1. The equilibrium price increases from P1 to P2 and the equilibrium output increases from q1 to q2.

A consumer consumes only two goods. Explain consumer's equilibrium with the help of utility analysis.

The consumer’s equilibrium in case of consumption of two goods is explained by the Law of Equi-Marginal Utility. As per this law, a consumer allocates his expenditure between two commodities in such a manner that the utility derived from each additional unit of the rupee spent on each of the commodities is equal to the marginal utility of money.
In case the price of one commodity rises, less of this commodity and more of the other commodities will be purchased so that the proportion will be restored. In the case of durable goods, it may not be possible to maintain proportionality.

State the behaviour of marginal product in the law of variable proportions. Explain the causes of this behaviour.

Law of Variable Proportions:
The law of variable proportions state that as the quantity of one factor is increased, keeping the other factors fixed, the marginal product of that factor will eventually decline. This means that up to the use of a certain amount of variable factor, marginal product of the factor may increase and after a certain stage it starts diminishing. 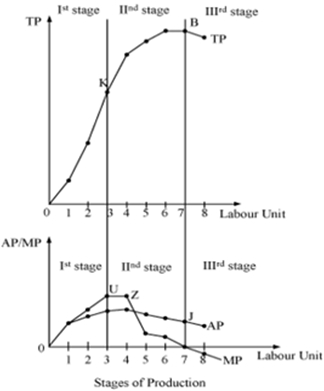 From the following information about a firm, find the firms equilibrium output in terms of marginal cost and marginal revenue. Give reasons. Also find profit at this output.

According to the MR-MC approach, the firm (or producer) attains its equilibrium, where the following two necessary and sufficient conditions are fulfilled.
1. MR = MC
2. MC must be rising after the equilibrium level of output
Thus from the table, we can say that the firm is in equilibrium at output equal to 4 units. When output is 4 units, MR= MC (thus, the first condition is satisfied) and MC increases after the 4th unit of output (therefore, the second condition is satisfied).
At output less than 4 units, if the firm produces slightly lesser level of output than 4 units, then the firm is facing price that exceeds the MC. This implies that higher profits can be achieved by increasing the level of output to 4 units. On the other hand, if the firm produces slightly higher level of output than 4 units, then the firm's MC exceeds its MR, thereby making profits negative. This implies that higher profits can be achieved by reducing the output level to 4 units. Thus, point E is the producer's equilibrium and 4 units of output is the profit maximising output level, where Price = MC and also MC is rising.

What is involuntary unemployment?

Involuntary unemployment refers to a situation when a person who is able and is willing to work does not get work at the going wage rate.

Explain the conditions of consumer's equilibrium with the help of the indifference curve analysis. Thus, we can conclude that if the consumer is consuming any bundle other than the optimum one, then he would rearrange his consumption bundle in such a manner that the equality between the MRS and the price ratio is established and he attains the state of equilibrium.