Calculate investment expenditure from the following data about an economy which is in equilibrium:
National income = 1000
Marginal propensity to save = 0.25
Autonomous consumption expenditure = 200

Explain national income equilibrium through aggregate demand and aggregate supply. Use diagram. Also explain the changes that take place in an economy when the economy is not in equilibrium.

There are two alternative approaches of national income determination and the first approach determines equilibrium level by the equality of aggregate demand and aggregate supply of output.

Under this approach, the equilibrium level of income is determined at the point where Aggregate Demand (AD) is equal to Aggregate Supply (AS).

In the diagram, consumption curve is depicted by C and the investment curve is depicted by the horizontal straight line parallel to the output/income axis. Summing-up the investment curve and consumption curve, we get the Aggregate Demand curve represented by AD = C + I. The Aggregate Supply curve is represented by the 45Â° line. Throughout this line, the planned expenditure is equal to the planned output. The point E is the equilibrium point, where the planned level of expenditure (AD) is equal to the planned level of output (AS). Accordingly, the equilibrium level of output (income) is OQ.

In case, if AD > AS, then it implies a situation, where the total demand for goods and services is more than the total supply of the goods and services. This implies a situation of excess demand. Due to the excess demand, the producers draw down their inventory and increase production. The increase in production requires hiring more factors of production, thereby increases employment level and income. Finally, the income will rise sufficiently to equate the AD with AS, thus the equilibrium is restored back.

On the other hand, In case, if AS > AD, then it implies a situation, where the total supply of goods and services is more than the total demand for the goods and services. This implies a situation of deficit demand. Due to the deficit demand, the producers experience piling-up of stock of unsold goods, i.e. inventory accumulation. This would force the producers to cut-back the production, thereby results in the reduced employment of factors of production. This leads to fall in the income and output. Finally, the income and output will fall sufficiently to equate the AD with AS, thus the equilibrium is restored back.

Government raises its expenditure on producing public goods. Which economic value does it reflect? Explain.

The economic value that is reflected in the rise in the production of public goods is the "social welfare". The major objective of the budgetary policy of the government is to enhance the welfare of the society at large. For this, it performs the allocative function. The allocative function is concerned with allocating the resources between the private and public sectors. As the public goods cannot be provided by the private sectors through market mechanism, hence the need for providing such goods is to be fulfilled by the government. In addition to this, private goods cannot be afforded by all, that is, only those who can pay for these goods can avail the benefits of such goods. But, as the public goods are required by all and are essential from welfare point of view, thus, government provide these goods.

Outline the steps required to be taken in deriving saving curve from the given consumption curve. Use diagram. 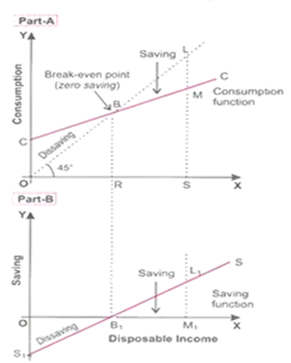 In part A, CC curve shows consumption function corresponding to each level of income whereas 45o line represents the income. Each pointy on 45o line is equidistant from X axis and Y axis. C curve intersects 45o line at point B at which BR=OR i.e. consumption = income. Therefore, point B is called break-even point showing zero saving.

Similarly, At OR level of income in Part A, vertical distance at point B being nil is shown as point B1 on X axis in lower part of the figure. Likewise, LM vertical distance of part A is shown as L1M1 in part B. By joining points S, B1 and L1 in the lower segment, we get saving curve. Thus saving curve or function is diagrammatically derived from consumption curve or function.

Explain the 'lender of last resort' function of a central bank.