When chromite ore FeCr2O4 is fused with NaOH in presence of air, a yellow-coloured compound (A) is obtained, which on acidification with dilute sulphuric acid gives a compound (B). Compound (B) on reaction with KCl forms an orange coloured crystalline compound (C).

(i) Mercury cell is used in hearing aids.
(ii)Fuel cell was used in the Apollo space programme.
(iii)Lead storage cell is used in automobiles and inverters.
(iv) Dry cell does not have a long life.

(i) Differentiate between adsorbtion and absorption.

(ii)Out of MgCl2 and AlCl3, which one is more effective in causing coagulation of negatively charged sol and why?

(iii)Out of sulphur sol and proteins, which one form multimolecular colloids?

(i) Adsorption is a surface phenomenon that causes the accumulation of molecules of a substance at the surface of a solid or liquid rather than in the bulk. In adsorption, the substance gets concentrated at the surface only. It does not penetrate through the surface to the bulk of the solid or liquid. For example, when a chalk stick is dipped into an ink solution, only its surface becomes coloured.

On the other hand, the process of absorption is a bulk phenomenon. In absorption, the absorbed substance gets uniformly distributed throughout the bulk of the solid or liquid. For example, when a sponge is dipped in water the whole sponge gets wets.

(ii)According to the Schulze-Hardy rule, the effectiveness of the salt causing flocculation depends on the charge on the ion of opposite sign to the charge on the sol particles. The greater the magnitude of the opposite charge, the higher the ability of a salt to coagulate the sol.
Thus, trivalent salt AlCl3 is more effective in causing the coagulation of a negatively charged sol than divalent salt MgCl2.

(i) This reaction is catalysed by Pt at high pressure. So, it is a zero-order reaction with molecularity 2.
(ii) The rate law expression for this reaction is Rate = k
Hence, the unit of k is mol L−1 s−1. 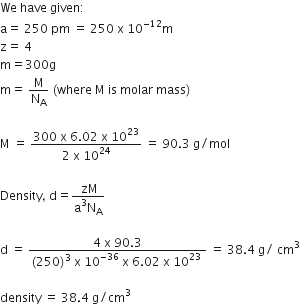 What type of magnetism is shown by a substance if magnetic moments of domains are arranged in same direction?

When the magnetic moments of domains are arranged in the same direction then, the substance shows ferromagnetism.

The rate constant for the first-order decomposition of H2O2 is given by the following equation: 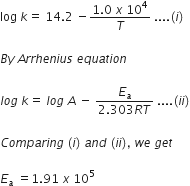 On  adding  NaOH  to  ammonium  sulphate,  a  colourless  gas  with  pungent  odour  is evolved, which forms a blue-coloured complex with Cu2+ ion. Identify the gas.

On adding NaOH to ammonium sulphate, ammonia gas is evolved. It has a pungent odour and forms a blue-coloured complex with the Cu2+ ion. The chemical reactions are as:

Write the main reason for the stability of colloidal sols.

There are two main reasons for the stability of colloidal sols:

Solvation: Colloidal particles are covered by a sheath of liquid in which they are extensively solvated, thereby providing stability.

Electrostatic stabilisation: Presence of equal and similar charges on the colloidal particles prevents coagulation of the colloidal sol.