Supply is a relation that shows the quantities that sellers are willing to make available for sale at alternative prices during a given time period, while all other things remaining the same.

What is a market economy?

In a market economy, all economic activities are organised through the market. It is an economic system in which economic decisions and the pricing of goods and services are guided solely by the aggregate interactions of a country's citizens and businesses and there is little government intervention or central planning.

When a firm is called 'price-taker'?

What is meant by 'increase' in supply?

Explain the implication of 'freedom of entry and exit to the firms' under perfect competition.

An important feature of a perfect competition is freedom of entry and exit to the firms. An entrepreneur who has the necessary capital and skill can start any business of his choice. In every industry, new firms are therefore opened from time to time.
Similarly in a market of perfect competition, any existing producer is free to close down his business if he so choose. As a result, some firms are going out of industry. Since there is no hindrance to the entry of new firms and exit of existing firms, the total number of firms under perfect competition remains very large.

Giving examples, explain the meaning of cost in economics.

In economics, cost means those payments which must be received by resource owners in order to ensure that they will continue to supply the resources for production.
The economic costs are based on a common principle which is called opportunity cost. It is the opportunity loss of not being able to produce some other product.
Economic cost includes explicit costs, implicit costs and normal profits. Example, wages to labourer, rent to land lord, profit to entrepreneur, interest to capital etc.
Explicit cost: Explicit costs are opportunity costs that involve direct monetary payment by producers. The explicit opportunity cost of the factors of production not already owned by a producer is the price that the producer has to pay for them.
Implicit cost: Implicit costs (also called implied, imputed or notional costs) are the opportunity costs not reflected in cash outflow but implied by the failure of the firm to allocate its existing (owned) resources, or factors of production to the best alternative use.

The set of bundles available to the consumer is called the budget set. The budget set is the collection of all bundles that the consumer can buy with her income at the prevailing market prices. It is represented by the following condition of inequality: P1x1 + P2x2≤M

Draw average revenue and marginal revenue curves in a single diagram of a firm which can sell more units of a good only by lowering the price of that good. Explain.

When a firm can sell more only by lowering the price the AR curve is downward sloping. When AR is falling, MR must be less than AR. Therefore, MR curve lies below the AR curve. 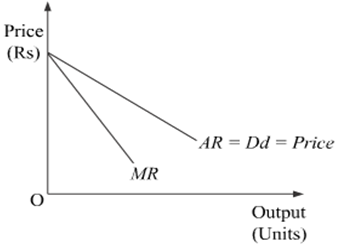 Explain the implication of 'perfect knowledge about market' under perfect competition.

All the buyers and sellers operating under perfect competition have perfect knowledge of the market conditions. Perfect knowledge means that both buyers and sellers are fully informed about the market price. For example, every seller knows the total quantity supplied and sold on a particular day or during a week. Similarly, no firm is in a position to charge a different price and no buyer will pay a higher price. As a result a uniform price prevails in the market.