There are large numbers of buyers in a perfectly competitive market. Explain the
significance of this feature.

The number of buyers and sellers operating under perfect competition is very high. As the
number of individual sellers very large, an individual seller cannot fix the price. Similarly
no single buyer can fix the price or change it by his action. Even if he increases or reduces
demand, it does not make any effect on the total demand in the market. Price of a product
is determined by the interaction of total demand and total supply in the market. Hence
every seller and buyer under perfect competition is a price taker and not a price maker.

Explain the effects of 'maximum price ceiling' on the market of a good'? Use diagram.

A price ceiling is a government-imposed price control or limit on how high a price is charged for a product. Governments intend price ceilings to protect consumers from conditions that could make necessary commodities unattainable. It is the legislated or government imposed maximum level of price that can be charged by the seller. Since price ceiling is lower than the equilibrium price thus the imposition of the price ceiling leads to excess demand as shown in the diagram below.

The following are the consequences and effects of price ceiling:
1) An effective price ceiling will lower the price of a good, which decreases the producer surplus. The effective price ceiling will also decrease the price for consumers,but any benefit gained from that will be minimized by the decreased sales due to the drop in supply caused by the lower price.
2) If a ceiling is to be imposed for a long period of time, a government may need to ration the good to ensure availability for the greatest number of consumers.
3) Prolonged shortages caused by price ceilings can create black markets for that good.
4) Due to artificially lowering the price, the demand becomes comparatively higher than the supply. This leads to the emergence of the problem of excess demand.
5) The imposition of the price ceiling ensures the access of the necessity goods within the reach of the poor people. This safeguards and enhances the welfare of the poor and vulnerable sections of the society.
6) Each consumer gets a fixed quantity of good (as per the quota). The quantity often falls short of meeting the individual’s requirements. This further leads to the problem of shortage and the consumer remains unsatisfied.
7) Often it has been found that the goods that are available at the ration shops are usually inferior goods and are adulterated and infiltrated.

A consumer spends Rs. 1000 on a good priced at Rs. 8 per unit. When price rises by 25 per cent, the consumer continues to spend Rs. 1000 on the good. Calculate price elasticity of demand by percentage method.

Give equation of Budget Line.

If Marginal Rate of Substitution is constant throughout, the Indifference curve will
be

Reason: If Marginal Rate of Substitution is constant throughout, the Indifference curve will
be downward sloping straight line.

What will be the impact of recently launched 'Clean India Mission' (Swachh Bharat
Mission) on the Production Possibilities curve of the economy and why?
Or

What will likely be the impact of large scale outflow of foreign capital on Production
Possibilities curve of the economy and why?

Production possibility curve is a graphical representation of the maximal mix of outputs
that an economy can achieve using its existing resources to full extent and in the most
efficient way. The mission of 'Clean India Mission' (Swachh Bharat Mission) will lead to
better waste-management technique. Consequently it leads to healthy India and increased
individual productivity. Both these factors will lead to better and efficient utilisation of
existing resources of an economy. Accordingly, the economy will move higher and closer
to initial PPC. This movement is being depicted in the below graph with the help of the
arrow from point P. 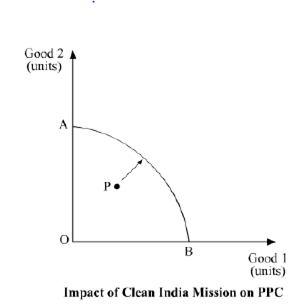 The large scale outflow of foreign capital will lead to a decrease in the availability of
resources, thereby shifting the Production Possibility Curve (PPC) from right to left that is
from AB to CD as shown in the following diagram. Hence, we can say that leftward shift of
PPC results in fall in output and resources. 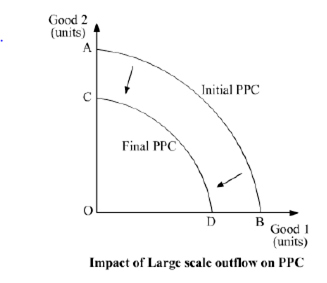 Cost or cost of production is the price paid to acquire, produce, accomplish, or maintain
anything It refers to the expenditures incurred or payments made by a firm to various
factors of production (such as, land, labour, capital and entrepreneur) and also non-factors of production (such as, raw materials, etc.)
Average Variable Cost (AVC) is defined as the total variable cost per unit of output. We
calculate it as:
AVC = TVC/q
Marginal cost is the change in the total cost that arises when the quantity produced is
incremented by one unit, that is, it is the cost of producing one more unit of a good.
Relationship between AVC and MC:
i. Both AVC and MC are derived from total variable cost (TVC). AVC refers to TVC per unit
of output and MC is the addition to TVC, when one more unit of output is produced.
ii. Both AVC and MC curves are U-shaped due to the Law of Variable Proportions. 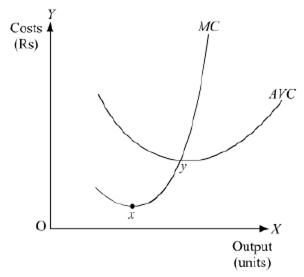 Revenue is the amount of money that a company actually receives during a specific period. In other words, revenue refers to the sale proceeds or sales receipts. 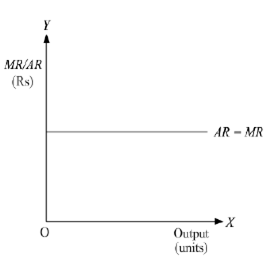 2. Under Imperfect Competition market, as output increases both AR and MR fall. However, AR remains greater than MR at all levels of output. Also, when AR curve becomes zero, then the MR curve is negative. Graphically, both AR curve and MR curve are downward sloping but the AR curve remains above the MR curve. 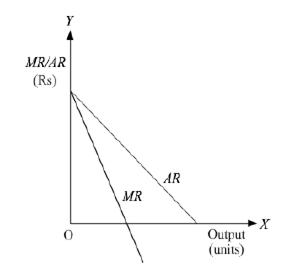 Giving reason comment on the shape of Production Possibilities curve based on the
following schedule:

When income of the consumer falls, the impact on price-demand curve of an inferior
good is: (choose the correct alternative)

Shifts to the right.