Who composed the original story of the text of Mahabharata? Describe the various stages through which Mahabharata was completed between the fifth century BCE and 400 C.E.

(i) The original story was probably composed by charioteer-bards known as sutas who generally accompanied Kshatriya warriors to the battlefield and composed poems celebrating their victories and other achievements.

(iii) Then, from the fifth century BCE, Brahmanas took over the story and began to commit it to writing.

(iv) The new kings want their itihasa to be recorded and preserved more systematically.

(v) This was the period when the worship of Vishnu was growing in importance, and Krishna, one of the important figures of the epic, was coming to be identified with Vishnu. Subsequently, between c. 200 and 400 CE, large didactic sections resembling the Manusmriti were added. This enormous composition is traditionally attributed to a sage named Vyasa.

Describe briefly the drainage system of the Harappan cities.

(i) The drainage system was planned very carefully.

(ii) Road and streets were laid out along an approximate grid pattern intersecting at right angles.

(iii) Streets were laid out with drains and he drains were covered.

(iv) The houses were built along them. Domestic waste water had to flow into the street drains.

(v) The drains could be cleaned at regular intervals. The drains were made of burnt bricks

Describe the sources used to construct the history of Mauryan Empire.

Sources to construct the history of Mauryan Empire:

(ii) Accounts of Megasthenes, a Greek ambassador to the court of Chandragupta Maurya.

(iii) Arthashastra composed by Kautilya, traditionally believed to be the minister of Chandragupta.

(v) Inscriptions of Asoka on rocks and pillars.

How and when were the ruins of Hampi brought to light? Explain briefly.

The ruins at Hampi were brought to light in 1800 by an engineer and antiquarian named Colonel Colin Mackenzie.

(i) An employee of the English East India Company, he prepared the first survey map of the site.

(ii) Much of the initial information he received was based on the memories of priests of the Virupaksha temple and the shrine of Pampadevi.

(iii) Subsequently, from 1856, photographers began to record the monuments which enabled scholars to study them.

(iv) As early as 1836 epigraphists began collecting several dozen inscriptions found at this and other temples at Hampi.

(v) In an effort to reconstruct the history of the city and the empire, historians collated information from these sources with accounts of foreign travellers and other literature written in Telugu, Kannada, Tamil and Sanskrit.

Mention the two rules about classification of people in terms of 'gotra' under Brahmanical practice around 1000 BCE onwards.

(i)Each Gotra was named after a Vedic seer.

(ii) Members of same Gotra could not marry.

Explain any five elements considered by the historians while analyzing the texts.

The five elements considered by the historians while analyzing the texts:

(i) They examine whether texts were written in Prakrit, Pali or Tamil, languages that were probably used by ordinary people, or in Sanskrit, a language meant almost exclusively for priests and elites.

(ii) They also consider the kinds of text. Were these mantras, learnt and chanted by ritual specialists, or stories that people could have read, or heard, and then retold if they found them interesting?

(iii) Besides, they try to find out about the authors whose perspectives and ideas shaped the text, as well as the intended audience, as, very often, authors keep the interests of their audience in mind while composing their work.

(iv) And they try and ascertain the possible date of the composition or compilation of the texts as well as the place where they may have been composed.

(v) It is only after making these assessments that they draw on the content of texts to arrive at an understanding of their historical significance.

On the given political outline map of India mark and label the following territories under Babar, Akbar and Aurangzeb: Delhi, Goa, Agra, Ajmer, Amber. 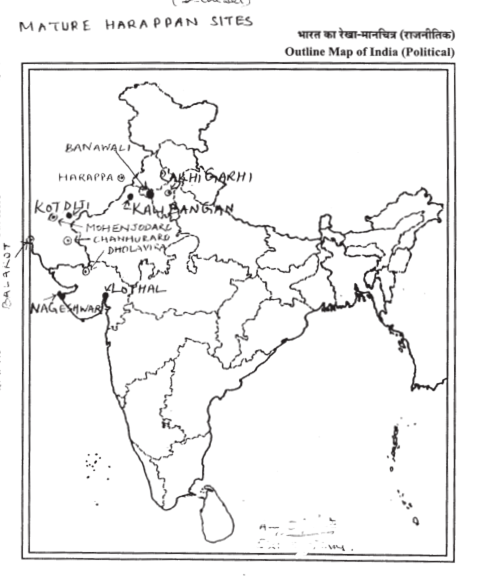 Mention the two ideas of Brahmanical system challenged by the Lingaytas.

Lingayats challenged the idea of caste :

(i)They challenged the idea of pollution attributed to certain groups by Brahmanas.

"The keeping of exact and detailed records was a major concern of the Mughal administration". Support the statement with facts.

Detailed records of the Mughal administration were kept in the following ways:

(i) Mir Bakshi supervised the corps of court writers who recorded all the applications and documents presented to the court.

(ii) In addition, agents (wakil) of nobles and regional rulers recorded the entire proceedings of the court under the heading “News from the Exalted Court” (Akhbarat-i Darbar-i Mualla) with the date and time of the court session (pahar).

(iii) The akhbarat contained all kinds of information such as attendance at the court, grant of offices and titles, diplomatic missions, presents received, or the enquiries made by the emperor about the health of an officer.

(iv) This information is valuable for writing the history of the public and private lives of kings and nobles.

(v) News reports and important official documents travelled across the length and breadth of the regions under Mughal rule by imperial post. Round-the-clock relays of foot-runners (qasid or pathmar) carried papers rolled up in bamboo containers.

Describe three factors that accounted for the constant expansion of agriculture during sixteenth and seventeenth centuries.

The three factors that accounted for the constant expansion of agriculture during sixteenth and seventeenth centuries:

(i) Abundance of land.

(iii) Mobility of the peasants

Irrigation projects received state support as well. For example, in northern India the state undertook digging of new canals (nahr, nala) and also repaired old ones like the shahnahr in the Punjab during Shah Jahan’s reign.

Though agriculture was labour intensive, peasants did use technologies that often harnessed cattle energy. A drill, pulled by a pair of giant oxen, was used to plant seeds, but broadcasting of seed was the most prevalent method. Hoeing and weeding were done simultaneously using a narrow iron blade with a small wooden handle.