Explain the features of Islamic religion which contributed to its spread through the sub-continent.

The features of Islamic religion which contributed to its spread through the sub-continent:

(i) The developments that followed the coming of Islam were not confined to ruling elites; in fact they permeated far and wide, through the subcontinent, amongst different social strata – peasants, artisans, warriors, merchants, to name a few.

(ii) All those who adopted Islam accepted, in principle, the five “pillars” of the faith: that there is one God, Allah, and Prophet Muhammad is his messenger (shahada);

(iv) However, these universal features were often overlaid with diversities in practice derived from sectarian affiliations (Sunni, Shi‘a), and the influence of local customary practices of converts from different social milieus.

Who was Cunningham? Mention any one account used by him to locate the early settlements of Harappa civilization.

Cunningham was the Director-General of the ASI.

He used the accounts left by Chinese Buddhist pilgrims who had visited the subcontinent between the fourth and seventh centuries CE to locate early settlements.

How do the modern historians explain the development of Magadha as the most powerful Mahajanpada? Explain.

The rise of Magadha as a powerful Mahajanapada:

(i) Magadha was a region where agriculture was especially productive.

(ii) Besides, iron mines were accessible and provided resources for tools and weapons.

(iii) Elephants, an important component of the army, were found in forests in the region.

(iv) Also, the Ganga and its tributaries provided a means of cheap and convenient communication.

(v) Magadha attributed its power to the policies of individuals: ruthlessly ambitious kings of whom Bimbisara, Ajatasattu and Mahapadma Nanda are the best known, and their ministers, who helped implement their policies.

On the given Political Outline Map of India mark and name the following:

On the given political Outline Map of India, mark and name the following: 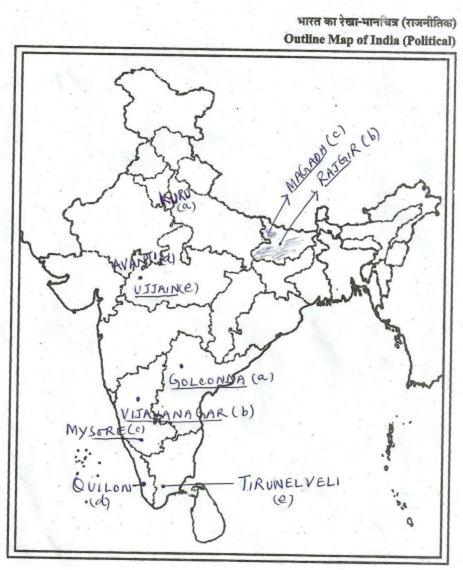 “The principle of ahimsa and renunciation emphasized by Jainism has left its mark”. Support the statement with Lord Mahavira’s messages.

The most important idea in Jainism is that:

(i) The entire world is animated: even stones, rocks and water have life.

(iii) According to Jaina teachings, the cycle of birth and rebirth is shaped through karma.

(iv) Asceticism and penance are required to free oneself from the cycle of karma.

(v) This can be achieved only by renouncing the world; therefore, monastic existence is a necessary condition of salvation.

’The most unique features of Mohenjodaro was the planned urban centre. ’ Support the statement with examples.

The most unique feature of Mohenjodaro was the planned urban centre:

(i) The settlement is divided into two sections, one smaller but higher and the other much larger.

(ii) On the Citadel buildings were constructed on mud brick platforms.

(iii) The Lower Town was walled and buildings were built on platforms.

(iv) There were signs of planning like bricks, sun-dried or baked, were in a standardized ratio.

In what ways have the daily routine and special festivities associated with the Mughal court conveyed a sense of power of the Mughal emperor? Explain.

The physical arrangement of the court, focused on the sovereign, mirrored his status as the heart of society.

(i) The emperor began his day at sunrise with personal religious devotions or prayers, and then appeared on a small balcony, the jharoka, facing the east.

(ii) Jharoka darshan was introduced by Akbar with the objective of broadening the acceptance of the imperial authority as part of popular faith.

(iii) After spending an hour at the jharoka, the emperor walked to the public hall of audience (diwan-i am) to conduct the primary business of his government. State officials presented reports and made requests.

(iv) Two hours later, the emperor was in the diwan-i khas to hold private audiences and discuss confidential matters. High ministers of state placed their petitions before him and tax officials presented their accounts. Occasionally, the emperor viewed the works of highly reputed artists or building plans of architects (mimar).

(v) On special occasions such as the anniversary of accession to the throne, Id, Shab-i barat and Holi, the court was full of life. Perfumed candles set in rich holders and palace walls festooned with colourful hangings made a tremendous impression on visitors.

Which dynasty did Krishnadeva Raya belong to? Mention any one the expansion and consolidation policies?

(i) The French philosopher Montesquieu, for instance, used this account to develop the idea of oriental despotism, according to which rulers in Asia (the Orient or the East) enjoyed absolute authority over their subjects.

(ii) They were kept in conditions of subjugation and poverty, arguing that all land belonged to the king and that private property was non-existent.

(iii) This idea was further developed as the concept of the Asiatic mode of production by Karl Marx in the nineteenth century.

(iv) He argued that in India (and other Asian countries), before colonialism, surplus was appropriated by the state.

(v) This led to the emergence of a society that was composed of a large number of autonomous and (internally) egalitarian village communities.

”The Mahabharata is a good source to study the Kinfolk’s values of ancient times.” Justify this statement with suitable arguments.

Mahabharata is a good source to study the kinfolk's values in the ancient times:

(i) Often people belonging to the same family share food and other resources, and live, work and perform rituals together.

(ii) While familial ties are often regarded as “natural” and based on blood, they are defined in many different ways.

(iii) Some societies regard cousins as being blood relations, whereas others do not.

(iv) Under patriliny, sons could claim the resources (including the throne in the case of kings) of their fathers when the latter died.

(v) This system, called exogamy was practiced which meant that the lives of young girls and women belonging to families that claimed high status were often carefully regulated to ensure that they were married at the “right” time and to the “right” person. This gave rise to the belief that kanyadana or the gift of a daughter in marriage was an important religious duty of the father.