With the help of a labelled diagram, state the underlying principle of a cyclotron. Explain clearly how it works to accelerate the charged particles.

Show that cyclotron frequency is independent of energy of the particle. Is there an upper limit on the energy acquired by the particle? Give reason.

Underlying principle of cyclotron: When a charged particle is kept in a magnetic field it experiences a force and the perpendicular magnetic field causes the particle to rotate.

Consider the figure which is shown.

A Dee which is at a negative potential accelerates the positive ions which are produced from the source S. Magnetic field which is perpendicular will move the ions in a circular motion inside the Dees. The magnetic field and the frequency of the applied voltages are so chosen that as the ion comes out of a Dee, the Dees change its polarity (positive becoming negative and vice-versa) and the ion is further accelerated. 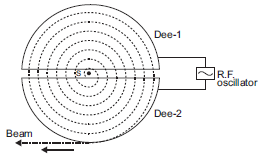 Now, the ions move with higher velocity along a circular path of greater radius. The phenomenon is continued till the ion reaches at the periphery of the Dees where an auxiliary negative electrode (deflecting plate) deflects the accelerated ion on the target to be bombarded.

Let the velocity of the positive ion having charge ‘q’ be ‘v’.

;m is the mass of ion, r the radius of the path of ion in the dee and B is the strength of the magnetic field.

Angular velocity of the ion is given by,

Now, time taken by the ion in describing a semi-circle i.e., turning through an angle  is given by,

The applied alternating potential should also have the same semi-periodic time (T/2) as that taken by the ion to cross either Dee.

This frequency is called the cyclotron frequency which is independent of the speed of the particle.

When monochromatic light travels from one medium to another its wavelength changes but frequency remains the same, Explain.

When monochromatic light travels from one medium to another it’s wavelength and speed both changes and the frequency remains unchanged.

Two convex lenses of same focal length but of aperture A1 and A2 (A2 < A1), are used as the objective lenses in two astronomical telescopes having identical eyepieces. What is the ratio of their resolving power? Which telescope will you prefer and why? Give reason.

Resolving power is given by, R =

; where A is the aperture.

Magnification of telescope is given by, m =

m is same for both.

Inorder to view the finer details of the object we use telescope of high resolving power.

Therefore, telescope having convex lens aperture A1 is used

State Biot-Savart law, giving the mathematical expression for it.

Use this law to derive the expression for the magnetic field due to a circular coil carrying current at a point along its axis.

How does a circular loop carrying current behave as a magnet?

Biot-Savart law states that the magnetic field strength (dB) produced due to a current element of current I and length dl at a point having position vector  to current element is given by,

is permeability of free space.

The magnitude of magnetic field is given by,

is the angle between the current element and position vector.

Magnetic field at the axis of a circular loop:

Consider a circular loop of radius R carrying current I. Let, P be a point on the axis of the circular loop at a distance x from its centre O.

Let,  be a small current element at point A.

Magnitude of magnetic induction dB at point P due to this current element is given by,

is perpendicular to the plane containing

at axial point P is given by,

Therefore the magnitude of resultant magnetic induction at axial point P due to the whole circular coil is given by,

If the coil contains N turns, then

is the required magnetic field.

Here, R2 , R3 and R4 are connected parallel to each other.

Therefore, equivalent resistance is given by,

Now, R1 is in series with R. So, equivalent resistance is given by,

Current I1 is given by,

Now, putting the values of

Show graphically, the variation of the de-Broglie wavelength (

) with the potential (V) through which an electron is accelerated from rest.

Wavelength is inversely proportional to the potential. 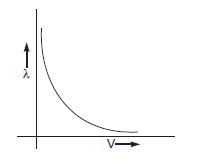 A conductor of length L is connected to a dc source of emf ε. If this conductor is replaced by another conductor of same material and same area of cross-section but of length 3L, how will the drift velocity change?

Drift velocity is denoted by vd.

ii) Relaxation time: The time for which an electron moves freely between two successive collisions of electron with lattice ions/atoms is called the relaxation time.

where L is the length of the conductor,

is the emf of the DC source,

L is the length of the conductor.

When, the conductor is replaced by another conductor of length 3L, drift- velocity will become one-third because both of them are inversely proportional to each other.

A current is induced in coil C1 due to the motion of current carrying coil C2.

(a) Write any two ways by which a large deflection can be obtained in the galvanometer G.

(b) Suggest an alternative device to demonstrate the induced current in place of galvanometer.

a) Two ways by which we can obtain deflection in the galvanometer is by:

i) Moving coil C2 towards C1 with high speed.

ii) By placing a soft iron laminated core at the centre of coil C1.

Using Gauss's law obtains the expression for the electric field due to a uniformly charged thin spherical shell of radius R at a point outside the shell. Draw a graph showing the variation of electric field with r, for r > R and r < R.

Electric field intensity at a point outside a uniformly charged thin spherical shell:

Consider a uniformly charged thin spherical shell of radius R carrying charge Q. Let us assume a spherical Gaussian surface of radius r (>R), concentric with the given shell inorder to find the electric field outside the shell.

This is the required electric field outside a given thin charged shell.

is the surface charge density of the spherical shell, then

Electric field inside the shell:

Thus, electric flux through Gaussian surface is 0 because of the absence of the charge.

The below graph shows the variation of electric field with r, for r >R and r < R. 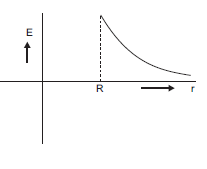 In a transistor, doping level in base is increased slightly. How will it affect (i) collector current and (ii) base current?

When doping level is increased in base,