Electric dipole moment is defined as the product of charge and the distance between the charges, and is directed from negative to positive charge.

How are radio waves produced?

Radio waves are produced by the accelerated motion of charges in conducting wires.

Where on the surface of Earth is the angle of dip 90°?

Plot a graph showing the variation of coulomb force (F) versus

, where r is the distance between the two charges of each pair of charges: (1

Force between charged particles is given by,

The graph between F and

is a straight line of slope  passing through the origin.

Magnitude of slope is more for attraction, therefore attractive force is greater than the repulsive force.

Write the expression for Lorentz magnetic force on a particle of charge ‘q’ moving with velocity v in a magnetic field B  . Show that no work is done by this force on the charged particle.

A steady current (I1) flows through a long straight wire. Another wire carrying steady current (I2) in the same direction is kept close and parallel to the first wire. Show with the help of a diagram how the magnetic field due to the current I1 exerts a magnetic force on the second wire. Write the expression for this force.

Lorentz magnetic force is given by,

PQ and RS which are placed at a distance r, carry currents I1 and I2 in the same direction.

Suppose, a current element ‘ab’ of length  of wire RS.

The magnetic field produced by current-carrying conductor PQ at the location of other wire RS,

So, total force on the conductor of length L is given by,

Force acting per unit length of conductor is given by,

A hollow metal sphere of radius 5 cm is charged such that the potential on its surface is 10 V. What is the potential at the centre of the sphere?

Potential at centre of sphere is equal to 10 V.

is enclosed by a cylindrical surface of radius r and length l, its axis coinciding with the length of the wire. Find the expression for the electric flux through the surface of the cylinder.

Radius and length of the cylindrical surface are r and l respectively.

Charge enclosed by the cylindrical surface =

In the given circuit, assuming point A to be at zero potential, use Kirchhoff’s rules to determine the potential at point B. 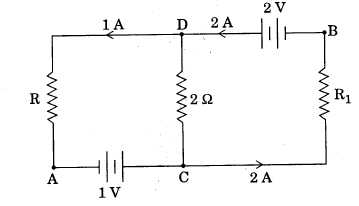 Two bar magnets are quickly moved towards a metallic loop connected across a capacitor ‘C’ as shown in the figure. Predict the polarity of the capacitor.

That is, plate of the capacitor A will be positive and plate B will be negative.