Accelerated charge is the source of energy of these waves.

The direction of oscillating field is

The field lines of a negative point charge are as shown in the figure. Does the kinetic energy of a small negative charge increase or decrease in going from B to A? 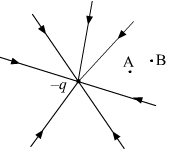 In a meter bridge shown in the figure, the balance point is found to be 40 cm from end A. If a resistance of 10  is connected in series with R, balance point is obtained 60 cm from A. Calculate the values of R and S.

is connected in series of R, balance point shifts towards AD = 60 cm.

State Lenz's law. Illustrate, by giving an example, how this law helps in predicting the direction of the current in a loop in the presence of a changing magnetic flux.

In a given coil of self-inductance of 5 mH, current changes from 4 A to 1 A in 30 ms. Calculate the emf induced in the coil.

In what way is Gauss's law in magnetism different from that used in electrostatics? Explain briefly.

Lenz law states that,polarity of the induced emf is such that it opposes a change in magnetic flux. 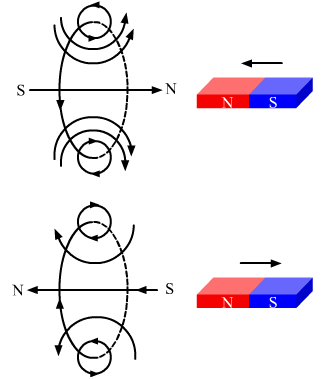 The given activity demonstrates the above statement. The amount of magnetic flux linked with the coil increases, when the north pole of a bar magnet is brought near the coil. Current in the coil is induced in a so as to opposes the increase in magnetic flux. This is possible only when the current induced in the coil is in anti-clockwise direction, with respect to an observer. The magnetic moment  associated with this induced emf has north polarity, towards the north pole of the approaching bar magnet.

So, emf induced in the coil is given by,

i) Gauss’s law for magnetism states that magnetic flux through any closed surface is 0.

Gauss law for electrostatics states that electric flux through a closed surface is give n by,

Therefore, electric flux is zero when the surface encloses an electric dipole.

Magnetic flux is zero implies that, isolated magnetic poles do not exist.

Equatorial magnetic field of earth is given by,

Therefore, Earth’s magnetic dipole moment is given by,

A series LCR circuit is connected across an a.c. source of variable angular frequency ‘

(a) In which case is the resonance sharper and why?

(b) In which case in the power dissipation more and why?

a) The variation of current with angular frequency for the two resistances R1 and R2 is shown in the graph below: 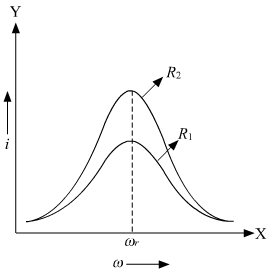 b) Power associated with resistance is given by,

Find the equivalent capacitance of the network shown in the figure, when each capacitor is of 1

F. When the ends X and Y are connected to a 6 V battery, find out

(i) the charge and

(ii) the energy stored in the network

Equivalent circuit can be drawn as, 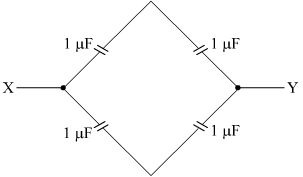 In the above circuit, in one branch there are two capacitors in series.

The circuit can be further re-arranged as,

We can see the two capacitors are in parallel.

Therefore, their resultant capacitance is,

Voltage of the battery = 6V

i) Charge across the capacitor, q = CV =

ii) Energy stored in the capacitor, E is given by,

What is the function of a 'Repeater' used in communication system?

Repeater is used to increase the range of the transmission in communication systems with the help of a set of receiver and transmitter.

Draw a graph to show variation of capacitive-reactance with frequency in an a.c. circuit. 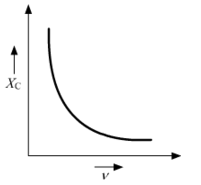 Here, XC is the capacitive-reactance and  is the frequency in an a.c circuit.

Underlying principle of potentiometer: Potential difference across a uniform wire is directly proportional to the length of the part across which the potential is measured when, a steady current flow through the wire.

Sensitivity of potentiometer can be increased by:

(i) Increasing the length of the wire

(ii) Decreasing the current in the wire using a rheostat

Potentiometer is preferred over voltmeter because potentiometer used the null method. During the balanced condition of potentiometer, no current is drawn by the galvanometer. Voltmeter measures the voltage across the terminals of a cell when the cell is in closed circuit, that is, when current is flowing through the cell.

Distinguish between emf and terminal voltage of a cell.