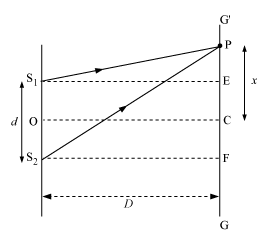 Let S1 and S2 be two slits separated by a distance d.

GG' is the screen at a distance D from the slits S1 and S2.

Point C is equidistant from both of the slits.

The intensity of light will be maximum at this point because the path difference of the waves reaching this point will be zero.

At point P, the path difference between the rays coming from the slits is given by, 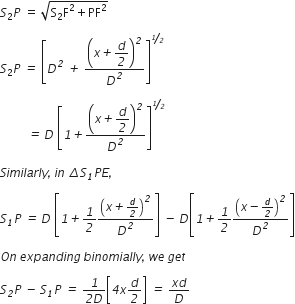 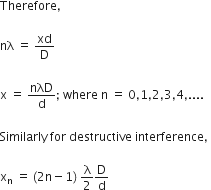 Graph of intensity distribution in young's double slit experiment is, 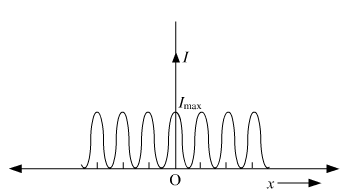 7698 Views
22. (i) An a.c. source of voltage V = Vo sin ωt is connected to a series combination of L, C and R. Use the phasor diagram to obtain an expression for impedance of a circuit and the phase angle between voltage and current. Find the condition when current will be in phase with the voltage. What is the circuit in this condition called?

ii) In a series LR circuit, XL = R and the power factor of the circuit is P1. When capacitor with capacitance C, such that XL = XC is put in series, the power factor becomes P2. Calculate P1 / P2.

Voltage of the source is given by, 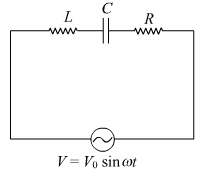 Let current of the source be I = Io sin ωt

Maximum voltage across L = VL  = IO XL, represented along OY and is 90o ahead of Io.

Maximum voltage across C = VC = Io XC, represented along OC and is lagging behind Io by 90o 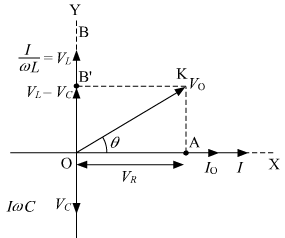 the vector sum of VR, VL and VC is resultant of OA and OB', represented along OK.

When, XL = XC ,  the voltage and current are in the same phase.

In such a situation, the circuit is known as non-inductive circuit. 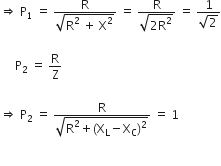 3757 Views
23. Meeta's father was driving her to school. At the traffic signal, she noticed that each traffic light was made of many tiny lights instead of a single bulb. When Meeta asked this question to her father, he explained the reason for this.

Answer the following questions based on above information:

(i) What were the values displayed by Meeta and her father?

(ii) What answer did Meeta's father give?

(iii) What are the tiny lights in traffic signals called and how do these operate?

The values displayed by Meeta and her father are:

The answer that Meeta's father had given would be the advantages of using LED lights over a single bulb.

a) LED's consume very less power as compared to an incandescent bulb.

b) The cost of tiny LED is much less than of a bulb. This reduces the maintenance cost of LED bulbs.

c) The working of the traffic will remain unhindered even if one of the bulbs is not working.

The tiny lights are called LED (Light Emitting Diode) and they work on the principle of de-excitation of electrons in a forward biased semiconductor upon passing electricity through them.

2941 Views
24. (i) Write the function of a transformer. State its principle of working with the help of a diagram. Mention various energy losses in this device.

(ii) The primary coil of an ideal step-up transformer has 100 turns and the transformation ratio is also 100. The input voltage and power are 220 V and 1100 W, respectively. Calculate the:

a) number of turns in secondary

b) current in primary

Transformer works on the principle of mutual induction. 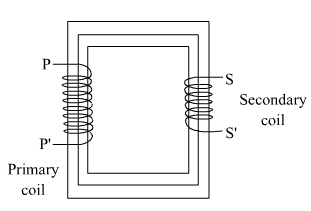 Flux leakage due to poor structure of the core and air gaps in the core.

Loss of energy due to heat produced by the resistance of the windings.

Eddy currents due to alternating magnetic flux in the iron core, which leads to loss due to heating.

Hysteresis, frequent and periodic magnetisation and demagnetization of the core, leading to loss of energy due to heat.

a)  Number of turns in secondary coil is given by,

b) Current in primary is given by,

c) Voltage across secondary  is given by,

d) Current in secondary is given by,

e) In an ideal transformer,

Power in secondary = Power in primary = 1,100 W
2030 Views
25. (i) Plot a graph to show variation of the angle of deviation as a function of angle of incidence for light passing through a prism. Derive an expression for refractive index of the prism in terms of angle of minimum deviation and angle of prism.

(ii) What is dispersion of light? What is its cause?

(iii) A ray of light incident normally on one face of a right isosceles prism is totally reflected, as shown in fig. What must be the minimum value of refractive index of glass? Give relevant calculations. 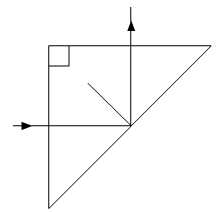 If the angle of incidence is increased gradually, then the angle of deviation first decreases, attains a minimum value (

) and then again starts increasing.

When angle of deviation is minimum, the prism is at a minimum deviation position.

The splitting of light into its component colors is known as dispersion of light.

When a narrow beam of light is incident on a glass prism, the emergent light splits into seven colours called VIBGYOR.

Reason for dispersion: The colors in the spectrum have different wavelengths. The wavelength of violet light is smaller than that of red light. the refractive index of a material in terms of the wavelength of the light is given by the Cauchy's expression.

Thus the refractive index is different for different colours and hence, dispersion occurs. 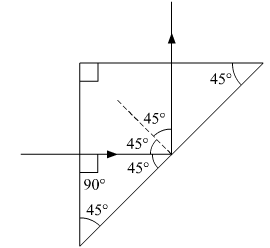 The light which is incident normally on one face of a right-angled isosceles triangle prism is totally reflected. 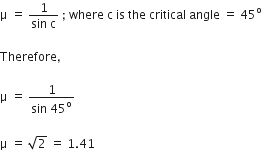 Therefore, minimum value of the refractive index of the glass is 1.41
4023 Views
26. (i) State the principle of working of a potentiometer.

(ii) In the following potentiometer circuit, AB is a uniform wire of length 1 m and resistance 10 Ω. Calculate the potential gradient along the wire and balance length AO (= l) 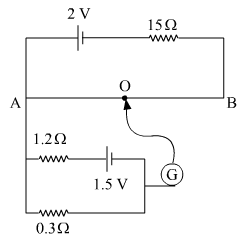 Principale of potentiometer: The potential difference across any two points of current carrying wire, having uniform cross-sectional area and material, of the potentiometer is directly proportional to the length between the two points.

For unifrom current and cross- sectional area, we have

Potential difference across the wire, =

; which is the required balance length of the wire.

27. Draw a schematic ray diagram of a reflecting telescope showing how rays coming from a distant object are received at the eyepiece. Write its two important advantages over a refracting telescope.

A reflecting telescope is as shown below: 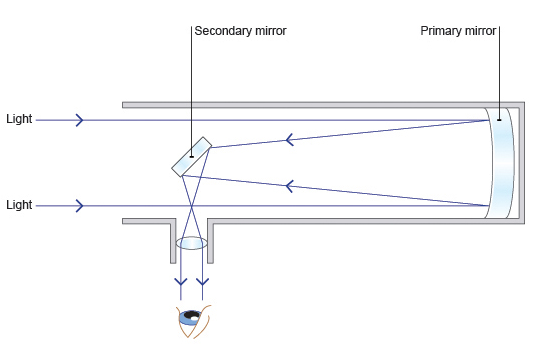 In a reflecting telescope, an image is formed by reflection from a curved mirror. The image formed is then magnified by a secondary mirror.

1. There is no chromatic aberration for reflecting telescopes as the objective is a mirror.

2. Spherical aberration is reduced in the case of reflecting telescopes by using mirror objective in the form of a paraboloid.

(iii) Why alloys like constantan and manganin are used for making standard resistors?

Drift velocity is the average velocity of the free electrons in the conductor with which they get drifted towards the positive end of the conductor under the influence of an external electric field.

Acceleration of each electron, 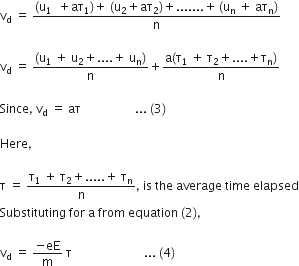 Electrons are accelerated because of the external electric field.

They move from one place to another and current is produced.

For small interval dt, we have

I dt = -q ; where q is the total charge flowing

Let, n be the free electrons per unit area. Then, total charge crossing area A in time dt is given by,

Substituting the value of vd, we get

From ohm's law, we have

is the conductivity of the material through whic the current is flowing,

Alloys like constantan and manganin are used for making standard resistors because:

a) they have high value of resistivity

b) temperature coefficient of resistance is less.

(ii) Find the relation between three wavelengths λ1, λ2,  and λ3  from the energy-level diagram shown below. 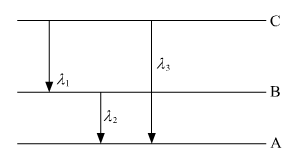 According to Bohr, an electron can revolve only in certain discrete, non-radiating orbits for which the total angular momentum of the revolving electron is an integral multiple of

; where h is the Planck's constant.

Using Rydberg's formula for spectra of hydrogen atom, we have 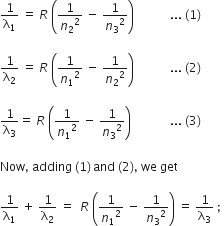 Hence, the relation between 3 wavelengths from the energy-level diagram is obtained.