Good ozone is found in the

The stratosphere is the second major layer of earth's atmosphere, just above the troposphere and below the mesosphere. It is the layer of ozone (O3). The ozone absorb high-energy UV-B and UV-C energy waves and breakdown into atomic Oxygen (O) and diatomic oxygen (O2).

Select the correct statements with respect to diseases and immunisation

if due to some reason B and T - lymphocytes are damaged, the body will not produce antibodies against a pathogen

The primary and secondary immune responses are carried out with the help of two special types of lymphocytes present in our blood, i.e, B - lymphocytes and T- lymphocytes, The B- lymphocytes produce an array ( a range) of proteins in response to pathogens into our blood to fight with them. These proteins are called antibodies. The T- cells themselves do not secrete antibodies but the help B- cells to produce them.

Examine the figure below and select the right option giving all the four part (A, B,C and D) correctly identified. 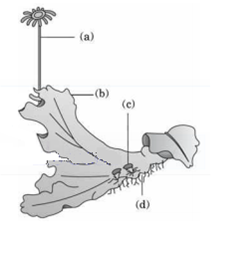 Which one of the following conditions of the zygotic cell would lead to the birth of a normal human female child?

The sex determining mechanism in case of humans is XY type. Sperms are of two types, one containing X -chromosome and another containing Y- chromosome.

Recombinant DNA technology is joining together of DNA molecules from two different species that are inserted into a host organism to produce new genetic combinations.

The logistic population growth is expressed by the equation


Since resources for growth for most animal populations are finite and become limiting sooner or later, the logistic growth model is considered a more realistic one.

In history of biology, human genome project led to the development of

Human Genome Project (HGP) was closely associated with  rapid development of the new area in biology called a Bioinformatics, the science of collecting and analysing complex biological data such as genetic codes.

Which one of the following is a wrong matching of a microbe and its industrial product, while the remaining three are correct?

Ureters act as urogenital ducts in

frog's both males and females

In the male frog, vasa efferential finally communicates with the urogenital duct tat comes out of the kidneys and open into claca. The cloaca is a small, median chamber that is used to pass faecal matter, urine and sperms to the exterior.

II. Restriction enzymes are used in isolation of DNA from another macro -molecules.

III. downstream processing is one of the steps of R-DNA technology.

IV. Disarmed pathogen vectors are also used in the transfer of R - DNA into the host.

Which are the two statements having mistakes?

Statements (I) and (III)

Transgenic Rosiae is actually Cow. It is first transgenic cow produced in 1997.

Restriction enzymes cut the DNA at a specific site. The separation of DNA is performed by gel electrophoresis