Write a note on vertebral column or back bone.

3. Lumbar vertebrae : These are present in abdominal region and are five in number.

5. Coccygeal vertebrae : These are four in number and are present below sacrum. These fuse to form one vertebra.

Name the bones of skull.

Skull : It has two sets of bones - the cranial and facial, that totals to 22 bones. Cranial bones are 8 in number. They form the hard protective outer covering, cranium for the brain. The facial region is made up of 14 skeletal elements which form the front part of the skull. A single U-shaped bone called hyoid is present at the base of the buccal cavity and it is also included in the skull.

A. Cranium : It encloses the brain. Cranium has following eight bones :

B. Bones of face : Face has fourteen bones namely : 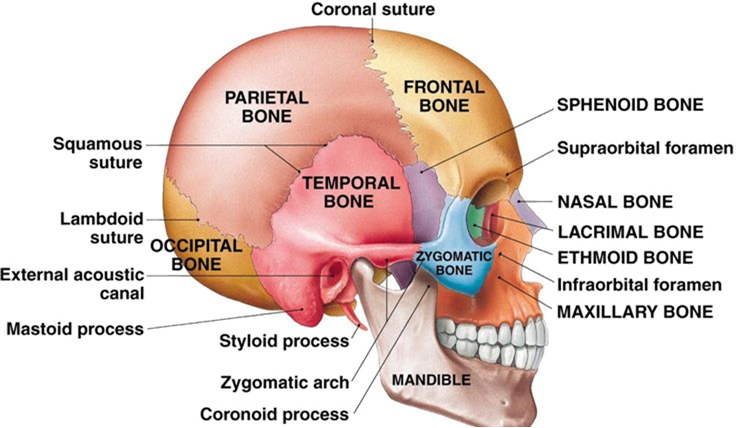 1. It protects the brain from injuries.

2. It helps in the movement of lower jaw.

3. It helps in the protection of eyes.

4. It helps in the protection of internal ear.

1. It protects the vital organs and blood vessels

2. It expands and contracts along with the lungs to allow for efficient breathing

103 Views
Describe the types of ribs.

Ribs : There are twelve pairs of ribs. The ribs are of three types :

2. False ribs : There are three pairs of false ribs. At one end these are attached to vertebral column and at second end these get attached to each other.

3. Floating ribs : There are two pairs of floating ribs. These are attached to vertebral column and the second end is free.

156 Views
Explain the division of the skeletal system.

The human skeletal system is made up of 206 bones and a few cartilages. It is divided in to two main categories.

A. Axial skeleton : It is present on median longitudinal axis of body e.g. skull, vertebral column, sternum, ribs etc. It comprises of 80 bones.

i. The skull - is composed of two sets of bones cranial and facial, that totals to 22 bones. Cranial bones are 8 in number.

ii. The vertebral colummn - is formed by 26 serially arranged units called vertebrae and is dorsally placed. It extends from the base of the skull and constitutes the main framework of the trunk. Each vertebra has a central hollow portion (neural canal) through which the spinal cord passes.

iii. Sternum is a flat bone on the ventral midline of thorax.

iv. Ribs - There are 12 pairs of ribs. Each rib is a thin flat bone connected dorsally to the vertebral column and ventrally to the sternum. The first 7 pairs are called True ribs, the 8th, 9th and 10th are called False ribs, and the 11th and 12th are called Floating ribs.

B. Appendicular skeleton : It is present on sides and present in appendages and associated with them. It includes the bones of the limbs and the pectoral girdles, pelvic girdles.

ii. Pelvic and pectoral girdle - Pectoral and Pelvic girdle bones help in the articulation of the upper and the lower limbs respectively with the axial skeleton. Each girdle is formed of two halves. Each half of pectoral girdle consists of a clavicle and a scapula. Pelvic girdle consists of two coxal bones. Each coxal bone is formed by the fusion of three bones – ilium, ischium and pubis.