Define velocity.
Velocity is defined as the time rate of change of displacement of the object. It is also defined as the speed of an object in a given direction.
324 Views
On a two-lane road, car A is travelling with a speed of 36 km h-1. Two cars B and C approach car A in opposite directions with a speed of 54 km h-1 each. At a certain instant, when the distance AB is equal to AC, both being 1 km, B decides to overtake A before C does. What minimum acceleration of car B is required to avoid an accident ? 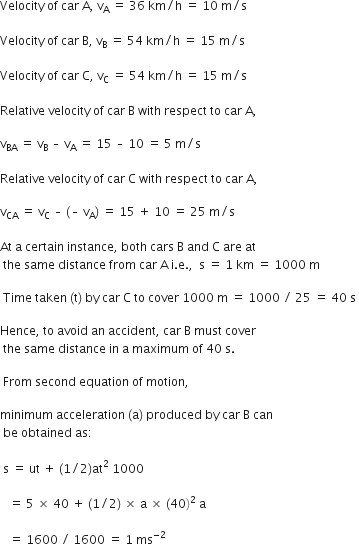 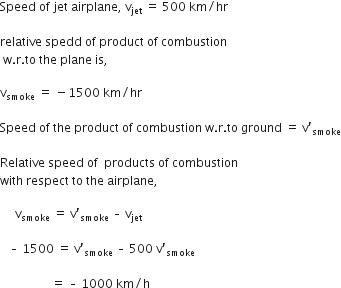 Negative sign implies that the direction of its products of combustion is opposite to the direction of motion of the jet airplane.
212 Views
A car moving along a straight highway with speed of 126 km h–1 is brought to a stop within a distance of 200 m. What is the retardation of the car (assumed uniform), and how long does it take for the car to stop. 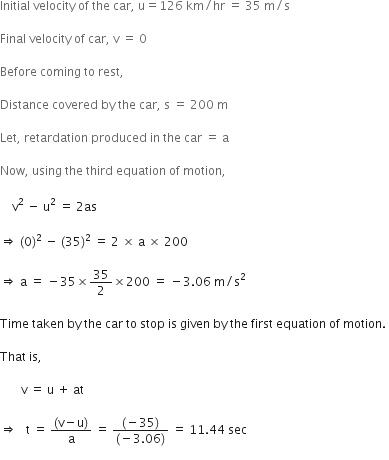 175 Views
Two trains A and B of length 400 m each are moving on two parallel tracks with a uniform speed of 72 km h–1 in the same direction, with A ahead of B. The driver of B decides to overtake A and accelerates by 1 m s–2. If after 50 s, the guard of B just brushes past the driver of A, what was the original distance between them ?

In case of train A:

Since the train is moving with uniform velocity,

Distance covered by train A is given by,

Distance travelled by second train B is,

Length of both trains = 2 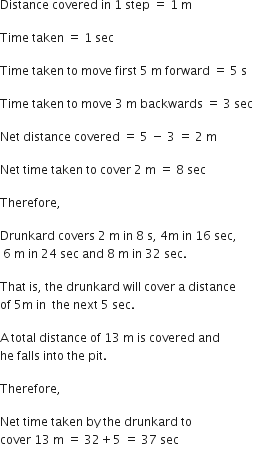