Politics In India Since Independence

Which among the following statements about the Partition is incorrect ?

The scheme of Partition included a plan for transfer of population across the border.
4423 Views
Here are two opinions –

Bismay : “The merger with the Indian State was an extension of democracy to the people of the Princely. States”.

Inderpreet: “I am not so sure, there was force being used. Democracy comes by creating consensus”.

What is your own opinion in the light of accession of Princely States and the responses of the people in these parts ?

My opinion is that merger with Indian State was an extension of democracy to the people of the Princely States. The decision of joining Pakistan could have threatened the very existence of a united India. The response of some rulers such as Travancore, Hyderabad was negative. This meant that India would get further divided into a number of small countries. The prospects of democracy for the people in these states also looked bleak. Indian leaders had aimed at unity, self-determination as well as democracy, in most of the Princely States, governments were run in a non-democratic manner and the people did not enjoy any rights. So the merger with Indian State established democracy in the Princely States.

While, it is correct that force was used but that was necessitated due to the prevailing circumstances of that time in the states like Hyderabad where a paramilitary force known as the Razakars whose communal atrocities knew no bound. They murdered, maimed and raped targeting particularly non muslim. Hence, the army was sent to control the Nizam’s forces. This led to Hyderabad’s accession to India.

1315 Views
Match the principles with the instances:
1845 Views
Read the following very different statements made in August 1947 :

“Today you have worn on your heads a crown of thorns. The seat of power is a nasty thing. You have to remain ever wakeful on that seat...... you have to he more humble and forbearing... now there will be no end to your being tested. ” – M.K Gandhi

“... India will awake to a life of freedom....we step out from the old to the new...we end today a period of ill fortune and India discovers herself again. The achievement we celebrate today is but a step, an opening of opportunity... ” – Jawaharlal Nehru

Spell out the agenda of nation building that flows from these two statements. Which one appeals more to you and why ?

The agenda of nation building that flows from these two statements is as given below :

According to M.K.Gandhi, there were different challenges of nation building viz. to shape a united nation, to establish democracy and to ensure the development and well-being of the entire society and not only of some sections. The problems would have arisen again and again had we been not been humble and forbearing to solve those problems. It was a fact because the partition led to one of the largest, most abrupt, unplanned and tragic transfer of population that human history has known. It was a test for the Indian leaders as their rehabilitation was not an easy task and there was a crown of thorns on their heads.

Whereas for Jawaharlal Nehru, freedom of India was only a step. There were problems of poverty, unemployment, rehabilitation of people, harmony among people and establishing democracy but freedom has given an opportunity to solve them.

The agenda of Gandhi appeals to me because it deals with the problems as a crown of thorns and advises the leaders to remain ever wakeful on the seat of power. It advises them to be humble and forbearing.

1501 Views
Take a current political map of India (showing outlines of states) and mark the location of the following Princely States:

(a) Junagadh (b) Manipur

The location of Princely States has been shown in the map given below : 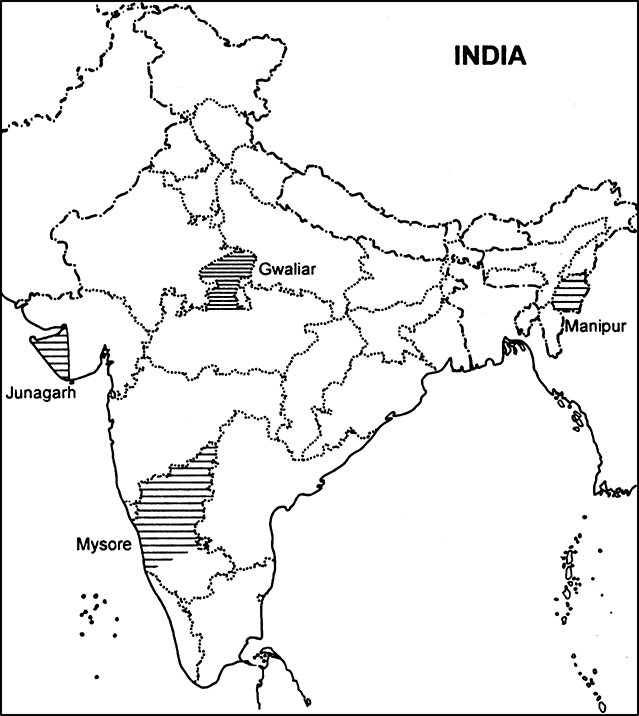