Balance theory of attitude change was proposed by Fritz Heider. It is a part of cognitive consistency theory. Cognitive consistency means that components, aspects or elements of the attitude or attitude system must be in the same direction to experience psychological comfort. If this does not happen, the person experiences psychological discomfort. This leads to some change in the attitude system to attain logical consistency. The Balance Theory of attitude change is based on the same principle. Balance theory can be explained with the help of relationship between three aspects or components of the attitude represented in a form of triangle.

For example, let s consider two people having a relationship and their attitude towards smoking. 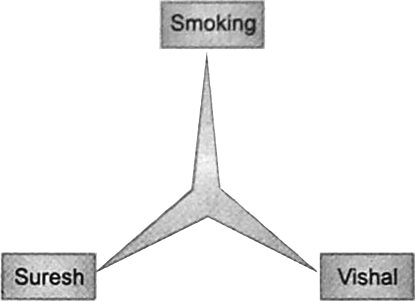 According to Balance theory imbalance (leading to psychological discomfort) is found when:

1. All three sides of triangle are negative.

In the above example if Suresh and Vishal dislike each other (negative), and have negative attitude towards smoking (two other sides are also negative) then the very fact that they dislike each other will lead to negativity in the situation. 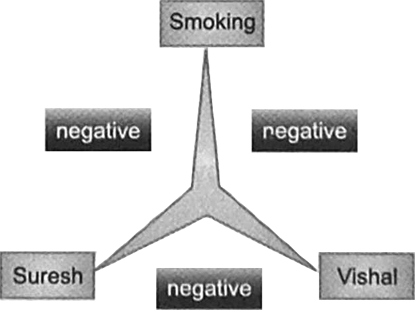 2. Two sides are positive and one side is negative:

In the above example, if Vishal and Suresh are very good friends. Suresh loves to smoke and Vishal hates to smoke. This implies two sides of the triangle are positive and one is negative. This will lead to an imbalance situation, i.e., two friends will have a conflict because they have opposite attitude towards smoking. 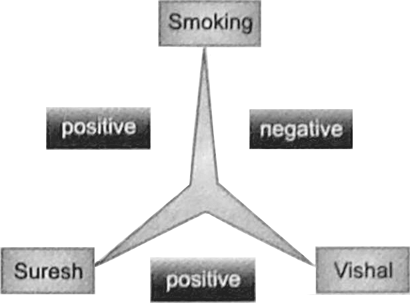 In the above example, Suresh and Vishal are very good friends and both of them love smoking. 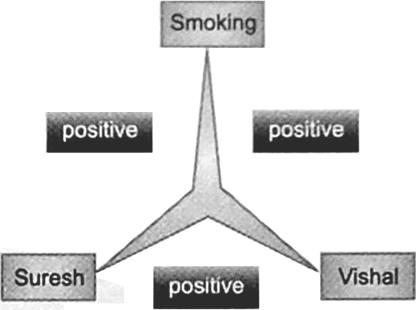 2. Two sides are negative and one side is positive.

In the above example, Suresh and Vishal are very good friends and both of them hold a negative attitude towards smoking. 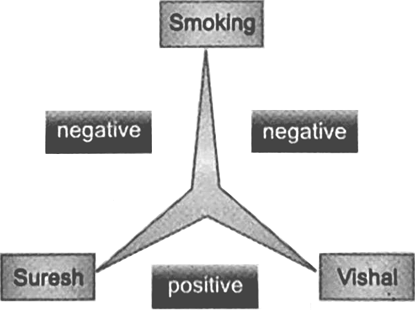 What is attitude system?

Attitude system refers to combination of 'simple' if it contains only one or a few attitudes and 'complex' if it is made up of many attitudes, i.e., several 'member' attitudes. Each member attitude that belongs to attitude system has A-B-C components.

Most of the psychologists agree upon the following major factors that influence attitudinal change:

(i) Characteristics of the Existing Attitude:

• Researches have found that sometimes fear works well in convincing people but if a massage generates too much fear, it turns off the receiver and has little persuasive effect.

(ii) Source Characteristics: Source credibility and attractiveness are two features that affect attitudes change. Attitudes are more likely to change when the message comes from highly credible source rather than from a low credible source. e.g., car sales may increase if they are publicized by automobile experts.

(iii) Message Characteristics: The message is the information that is presented in order to bring about an attitude change. Whether the message contains a rational or an emotional appeal for example makes a difference. The motive of message also determines possibility of change, e.g., drinking milk may be said to make person healthy.

Finally, the mode of spreading the message plays a significant role. Face-to-face transmission of the message is usually more effective than indirect transmission as for instance, through letters and pamphlets or even through mass media. These days transmission through visual media such as television and the internet are similar to face-to-face interaction, but not a substitute for the later.

• Qualities of the target, such as persuasibility, strong prejudices, self-esteem and intelligence influence the likelihood of attitude change.

• People with strong prejudices are less prone to any attitude change.

• Persons having low self-esteem do not have sufficient confidence in themselves, change their attitudes more easily than those who are high on self-esteem.

Attitude is a set of mind, a set of views, or thoughts regarding some topics which have an evaluative feature.

Give the meaning of "causal attribution'. Explain fundamental attribution error and actor-observer effect with the help of an example.

• Attribution is a systematic process of assigning cause to a person's behaviour.

• It is the process of thinking and perceiving the causes of your own or others success and failure is an example of causal attribution.

• We normally tend to believe that nothing happens in this world without a cause. There is always a cause of everything in the world.

Fritz Heider, who is credited as the 'founder of attribution theory', suggested that human beings function as naive scientists. Heider categorized all causes into two categories—internal and external.

• Internal Causes: It includes something within the person. e.g., intelligence, aptitude or hot temper.

• External Causes: These causes include anything outside the person. e.g., fate, resources.

Research work has shown that people attribute their success more to internal factors and failure more to external factors than vice-versa. Weiner added another dimension to causal attribution.

• Stability: It refers to whether the cause is stable—it does not change over a long period (memory, family), or is instability—it may change over a short period of time (interest, luck).

Fundamental Attribution Error: In making attributions, there is an overall tendency to attribute internal causes more than external causes or situational factors for behaviours. This is called fundamental attribution error. This tendency varies from culture to culture. For examples, Indians tend to give more credit to external factors.

For instance one of your classmates fell and got injured. You must have thought that he might be walking carelessly and attribute the responsibility for injury to him. Now the same thing happens to you. You would put the blame on the condition of the road or other factor. The tendency to blame external factors for our own behaviour and internal factors for others behaviour is known as fundamental attributional error. When you hear that one of your relatives met an accident, a general tendency is to blame the injured person. People blame the person because it is assuring for them. If they are more vigilant, they will not meet such an accident. The blame is often placed on the people who are the sufferer. Even in the case of natural disasters, such as earthquakes, cyclones, floods, there is a pervasive belief that it is because of the sins, which people have committed. This phenomenon is known the blaming the victim.