(a) Explain any two factors that justify the need of modulating a low-frequency signal.

(b) Write two advantages of frequency modulation over amplitude modulation.

Modulating low-frequency signals are required because:

i) Size of the antenna: Antenna is required for both transmission and reception of the signal whose size (at least

) should be comparable to the wavelength of the signal so that time variation of the signal can be properly sensed by the antenna. For a low-frequency signal, the wavelength is large. Therefore, a large antenna of such a huge height is practically impossible to construct and operate.

iii) Higher energy: High-frequency signals have high energy and therefore, even after loss due to attenuation, signals can be carried over longer distances.

ii) FM reception is quite immune to noise in comparison to AM reception. Noise is a form of amplitude variation in the transmitted signal. Thus, using amplitude limiters in the FM receivers, the noise is eliminated.

Explain the terms (i) Attenuation and (ii) Demodulation used in Communication System.

(i) Attenuation: Attenuation is the process of loss in the strength of signal while propagating through a medium.

(ii) Demodulation: Demodulation is the process of retrieval of information from the carrier wave at the receiver end. It is the reverse process of modulation.
1868 Views
13. State Brewster's law.
The value of Brewster's angle for a transparent medium is different for light of different colours. Give reason.
Brewster discovered a relation between polarising angle, ip and the refrcative index n of the transparent material with respect to the surrounding medium.

The law is given by,

When a light is incident on a transparent surface at the polarising angle, the reflected and the refracted rays are perpendicular to each other.

Calculate the energy in the fusion reaction:

Then, the energy released as the nucleus breaks is given by,

Energy in the fusion reaction is given by,

3007 Views
15. Write three characteristic features in photoelectric effect that cannot be explained on the basis of wave theory of light, but can be explained only using Einstein's equation.

The three characteristics of photoelectric effect, which cannot be explained on the basis of wave theory of light are:

1. For a given metal and frequency of incident radiation, the number of photoelectrons ejected per second is directly proportional to the intensity of the incident light.

2. For a given metal, a certain minimum frequency of the incident radiation below which no emission of photoelectrons take place. The is the threshold frequency.

, where V is the is accelerating potential for two particles A and B, carrying the same charge but different masses m1 and m2 (m1 > m2). Which one of the two represents a particle of smaller mass and why?

Charge (q) is the same but the mass of both particles is different (m1 > m2).

The De-broglie wavelength given by,

The slope of the graph of λ versus

The slope of the smaller mass is larger; therefore, plat A in the above graph represents mass m2.

6669 Views
17. How are em waves produced by oscillating charges?

Draw a sketch of linearly polarised em waves propagating in the Z-direction. Indicate the directions of the oscillating electric and magnetic fields.

Write Maxwell's generalisation of Ampere's circuital law. Show that in the process of charging a capacitor, the current produced within the plates of the capacitor is I =

is the electric flux produced during charging of the capacitor plates.

The propagation of electromagnetic waves can be shown as: 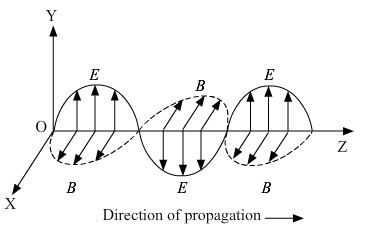 
Maxwell's generalization of ampere's circuital law given by,

Consider that a parallel capacitor C is charging in a circuit.

The magnitude of electric field between the two plates will be,

, is perpendicular to the surface of the plate.

Electric flux through the surface will be, 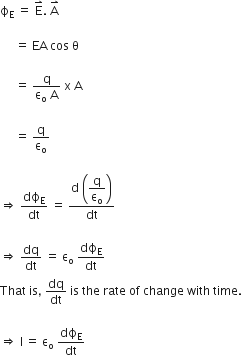 4481 Views
18. Two long, straight, parallel conductors carry steady currents, I1 and I2 , separated by a distance . If the currents are flowing in the same direction, show how the magnetic field set up in one produces an attractive force on the other? Obtain the expression for this force. Hence, define one ampere. 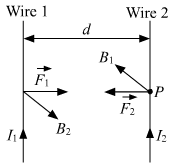 Magnetic field induction at some point P on wire 2 due to current I1 passing through wire 1 is given by,

Magnetic field is produced by wire 1 and current carrying wire 2 lies in magnetic field B1.
The unit length of wire 2 will experience a force, given by

According to Fleming's left-hand rule, the force on wire 2 acts in the plane of paper perpendicular to wire 2, directed towards wire 1. Similarly, wire 1 also experiences the same force towards wire 2. Thus, both the conducting wires attract each other with the same force F.

One ampere can be defined as the amount of current flowing through two parallel conductors, which are in the same direction or opposite directions, placed at a distance of one metre in free space, and both the wires attract or repel each other with a force of 2 x 10-7 per metre of their lengths.
4422 Views
19. (i) Write the functions of three segments of a transistor.

i) The function of three segments of a transistor are:

Base: Base provides the interaction between the collector and the base

ii) An n-p-n transistor is as shown below: 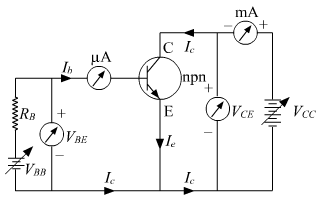 3044 Views
20. (a) Calculate the distance of an object of height h from a concave mirror of radius of curvature 20 cm, so as to obtain a real image of magnification 2. Find the location of image also.

(b) Using mirror formula, explain why does a convex mirror always produce a virtual image.

Since the image obtained is real, therefore magnification of the image, m = -2

For a convex mirror,

Using mirror formula, we have

That is, the image formed by a convex lens is always behind the mirror and hence is virtual.