Two electric bulbs P and Q have their resistances in the ratio of 1: 2. They are connected in series across a battery.Find the ratio of the power dissipation in these bulbs.

Four point charges Q, q, Q and q are placed at the corners of a square of side ‘a’ as shown in the figure

Find the
(a) resultant electric force on a charge Q,

(b) the potential energy of this system. 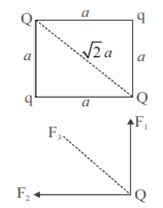 (b) The potential energy of the given system,

An iron ring of relative permeability μr has windings of insulated copper wire of n turns per metre. When the current in the windings is I, find the expression for the magnetic field in the ring.

There will be two magnetic field one due to current and another due to magnetics.

The susceptibility of this material is between 0 and 1 so its a paramagnetic material.

The positive terminals are connected to the offsite ends of the resistor, they send the current in opposite directions.

∴ current in the circuit I = E/R

Using the concept of free electrons in a conductor, derive the expression for the conductivity of a wire in terms of number density and relaxation time. Hence obtain the relation between current density and the applied electric field E.

As we know that,

Three point charges q, – 4q and 2q are placed at the vertices of an equilateral triangle ABC of side ‘l’ as shown in the figure. Obtain the expression for the magnitude of the resultant electric force acting on the charge q.

(b) Find out the amount of the work done to separate the charges at infinite distance. 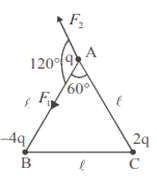 (b) The amount of work done to separate the charges at infinity will be equal to potential energy.

Define the term 'conductivity' of a metallic wire. Write its SI unit.

The conductivity of a metallic wire is defined as the degree to which a specified material conduct electricity calculated as the ratio of current density in the material to the electric field which causes the flow of current,