1. Distinguish between ‘rate expression’ and ‘rate constant’ of a reaction.

The rate expression can be defined as the stoichiometric coefficients of reactants and products. An expression in which the rate of reaction is given in terms of the molar concentration of the reactants, with each term raised to some power, which may or may not is the stoichiometric coefficient of the reacting species in a balanced chemical equation.

The rate constant can be defined as the rate of the reaction when the concentration of each of the reactant is taken as unity.

The rate expression for the above reaction can be written as follows:

Now, if the concentration of NO and O2 is taken to be unity, then the rate constant is found to be equal to the rate of the reaction.

SF6 is kinetically an inert substance.

The kinetic inertness of SF6 can be explained on the basis of its structure.

The six fluoride (F-) atoms protect the sulphur atom from attack by the regents to such an extent that even thermodynamically most favorable reactions like hydrolysis do not occur.

(i) All the P-Cl bonds in PCl5 molecule are not equivalent.

(ii) Sulphur has a greater tendency for catenation than oxygen.

(i) In gaseous and liquid state, PCl5 has a trigonal bipyramidal structure. In this structure, the two axial P-Cl bonds are longer and less stable than the three equatorial P-Cl bonds. This is because of the greater bond pair - bond pair repulsion in the axial bonds. Hence, all the bonds in PCl5 are not equivalent.

(ii) Because of stronger S-S bonds as compared to O-O bonds, sulphur has a greater tendency for catenation than oxygen.

1. The migration of charged colloidal particles or molecules through a solution under the influence of an applied electric field usually provided by immersed electrodes. Also called ionophoresis, phoresis.

2. A method of separating substances, especially proteins, and analyzing molecular structure based on the rate of movement of each component in a colloidal suspension while under the influence of an electric field.

The process of corrosion is a redox reaction and involves simultaneous oxidation and reduction reactions. It can, therefore, be referred to as an electrochemical reaction.

In the process of corrosion, due to the presence of air and moisture, oxidation takes place at a particular spot of an object made of iron. That spot behaves as the anode. The reaction at the anode is can be written as follows.

Electrons released at the anodic spot move through the metallic object and go to another spot of the object. There, in the presence of H+ ions, the electrons reduce molecular oxygen. This spot behaves as the cathode. These H+ ions come either from H2CO3, which are formed due to the dissolution of carbon dioxide from the air into water or from the dissolution of other acidic oxides from the atmosphere in water.

The reaction corresponding at the cathode is written as follows.

The shorter N - O bond in  is due to the existence of resonance in. The resonating structures can be drawn as follows.

Due to resonance in, the two bonds are equivalent. This leads to a decrease in bond length.

Now, the resonating structures for can be drawn as:

As seen from the above resonating structures of

the lone pair is delocalized between the 2 oxygen groups. Bond order equal to 1+1/2=3/2.

less than that of

Determine the values of equilibrium constant (KC) and

G° for the following reaction: 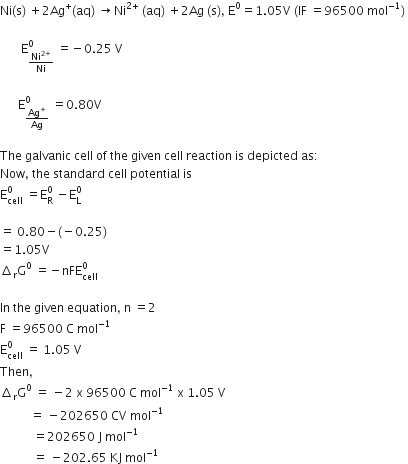 ‘Crystalline solids are anisotropic in nature’. What does this statement mean?