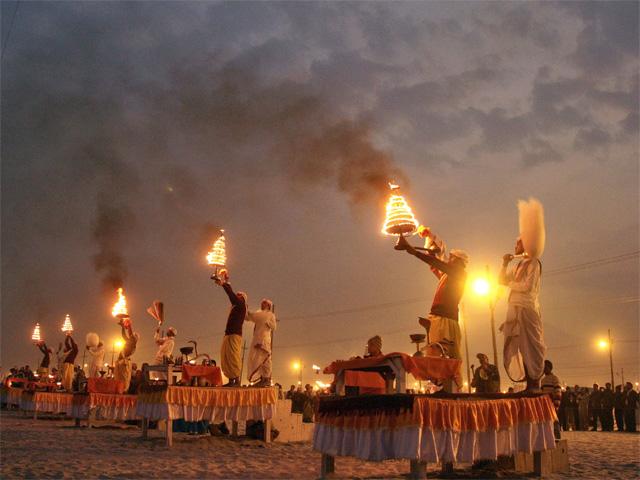 Allahabad city, also known as Prayag or Ilahabad, is a city in the Indian state of Uttar Pradesh. The city's original name; Prayaga or "place of offerings", comes from its location at the 'Sangam' or confluence, of the rivers Ganga, Yamuna and mythical Saraswati.

Allahabad city was earlier known as Prayāga, a name still commonly used. Prayāga existed during the Vedic period, and is mentioned in the Veda as the location where Brahma, the Hindu creator of the universe, attended a ritual sacrifice.

It is the second-oldest city in India, and plays a central role in Hindu scriptures. Allahabad was originally called Kaushambi, now a separate district, by the Kuru rulers of Hastinapur, who developed it as their capital.

Allahabad is also known as the "city of prime ministers" because post independence 7 out of 13 prime ministers of India belonged to Allahabad (Jawaharlal Nehru, Lal Bahadur Shastri, Indira Gandhi, Rajiv Gandhi, Gulzarilal Nanda, Vishwanath Pratap Singh and Chandra Shekhar). All these seven leaders were either born in Allahabad, or were alumni of Allahabad University, or were elected from a constituency in Allahabad.

Established on September 23, 1887, University of Allahabad is the fourth oldest University in India. At one point it was called the "Oxford of the East".

Civil Lines is the central business district of the city and is famous for its urban setting, gridiron plan roads and high rise buildings. Built in 1857, it was the largest town-planning project carried out in India before the establishment of New Delhi.

The New Yamuna Bridge in Allahabad, connecting it to its neighborhood Naini, is the longest cable-stayed bridge in India. Its 1510 m long and 260 m wide.

The Kumbh Mela, believed to be the largest religious gathering on earth is held every 12 years on the banks of the 'Sangam'- the confluence of the holy rivers Ganga, Yamuna and the mythical Saraswati. The Mela alternates between Nasik, Allahabad, Ujjain and Haridwar every three years. The one celebrated at the Holy Sangam in Allahabad is the largest and holiest of them.

The 2013 Kumbh Mela in Allahabad was the largest peaceful gathering in human history. An entire city was built for the occasion, but unlike the facilities built for the Olympic Games or other international events, this city was designed to be erected, inhabited and dismantled all in the space of a mere five months. As many as five power substations, temporary police stations, hospitals and stalls were set up for providing various facilities to the visitors.

An estimated 120 million people visited Maha Kumbh Mela in 2013 in Allahabad over a two-month period, including over 30 million on a single day, on 10 February 2013 (the day of Mauni Amavasya).