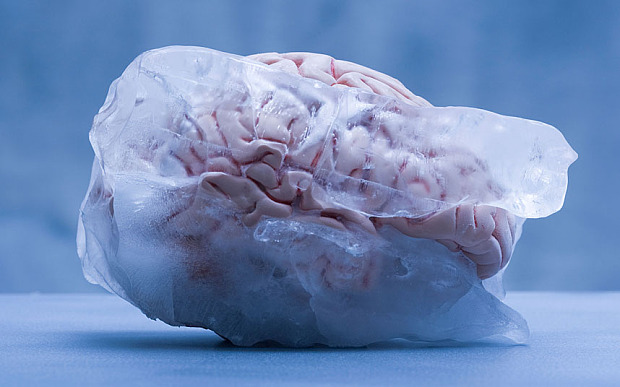 It was a hot summer day. Tired and drenched in sweat, I was barely able to walk. The sight of the ice-cream trolley was a blessing. The mere sight of it filled me with zest, and without delay, I ordered ice-cream and was all set to devour it. I took a spoonful and put it in my mouth. Suddenly, I felt a shooting pain at the top of the head. The ice-cream had given me a severe headache. It lasted for a few seconds and I was horrified to eat another spoon.

Seeing me in discomfort, a man passing by, asked if I was okay. As soon as I told him the issue, he said – “Don’t worry, you are just experiencing the weird phenomenon of Brain-Freeze”.

By the time I could ask him what on earth did he mean by Brain – Freeze he had vanished into thin air.

Fascinated by the term and forgetting all about the headache I took the help of internet to know about it.

Here is the information that I got from the research. Brain freeze, Is it even real?

Well, it is as real as the ice-cream!  Brain freeze aka an ice-cream headache, cold-stimulus headache, cranial cramp – is a form of brief pain or a headache that occurs when we consume something cold as cold beverages or foods such as ice cream.

Scientifically it is known as ‘Sphenopalatine Ganglioneuralgia’ which means nerve pain of the sphenopalatine ganglion or the nerve located on the roof of our mouth. The term seems to be a tongue twister so I will continue using the simpler term Brain-freeze.

Brain freeze typically hits about 10 seconds after chilling your palate and lasts about half a minute. Only a third of people experience brain freeze from eating something cold. Brain freeze is caused by having something cold touch the palate or the roof of the mouth. It is due to the rapid cooling and then the warming of the blood capillaries around the face and the activation of the pain receptors. It is possible to suffer from an ice-cream headache in both hot and cold weather because the effect relies upon the temperature of the food being consumed rather than that of the environment

As the cold ice cream hits the roof of the mouth, it activates the nerves and triggers a nervous system signalling. This anterior cerebral artery, which supplies oxygenated blood to most medial portions of the frontal lobes and superior medial parietal lobes, is ordered to dilate and increase the blood flow. The increased blood flow is to increase the temperature of the brain. The dilation results in 20% more blood flow through the anterior artery of the frontal lobe.

The dilation raises the pressure inside the skull that is sensed by the pain receptors, which in turn releases pain-causing prostaglandins. The prostaglandins increase the sensitivity to further pain and produce inflammation while sending signals through the trigeminal nerve (the major nerve in the facial area), to alert the brain of the problem.

The trigeminal nerve also senses the facial pain; the brain interprets this as referred pain. Referred pain is when the pain occurs in one place in the body but is felt elsewhere. So, the brain thinks the pain to be coming from the forehead.

As the intracranial pressure and temperature in the brain rise the blood vessel contracts, and the pressure in the brain is reduced before reaching dangerous levels. When the anterior cerebral artery constricts, the pain disappears.

Brain freeze is your body's way of putting on the brakes and warning you to slow down.

It is to protect your brain from the frost damage.

The dilation, then quick constriction, of this blood vessel may be a type of self-defense for the brain.

Ways to avoid freezing your brain.

Don’t worry, there are other ways to avoid this weird phenomenon. 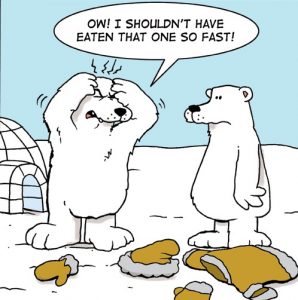 1. You can press your tongue against the roof of your mouth. The heat and pressure help in lessening the pain.

2. You can use your thumb to press the press the roof of your mouth to warm it. But hey, you may look silly doing this.

3. Drink something warm to increase the temperature of your mouth. This usually relieves the pain.

4. You can try eating slow and taking small bites to protect your brain from the cold stimulated headaches.

The next time I eat ice-cream I will make sure that I do not get the ‘Sphenopalatine Ganglioneuralgia’ or the Brain freeze by eating small scoops and a bit slow. Because avoiding ice-cream is not a good option.