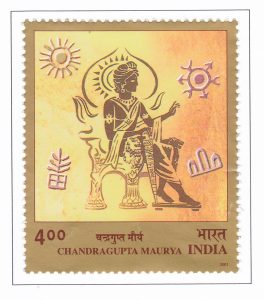 Chandragupta Maurya was born sometime around 340 BCE, reportedly in Patna, now in the Bihar state of India.

He was of humble origin, since nobody recorded anything about him until he founded the Mauryan Empire.

Chandragupta was brave and charismatic – a born leader.

The young man came to the attention of a famous Brahmin scholar, Chanakya, who began to groom Chandragupta helping him raise an army, and taught him tactics through different Hindu sutras.

Chandragupta’s new empire, at the time of it's founding, stretched from what is now Afghanistan in the west to Myanmar (Burma) in the west, and from Jammu/Kashmir in the north to the Deccan Plateau in the south. Chanakya served as the equivalent of a “prime minister” in the fledgling government.

When Alexander the Great died in 323 BCE, his generals divided up his empire so that each of them would have a territory to rule. By about 316, Chandragupta Maurya was able to defeat and incorporate all the ones in the mountains of Central Asia, extending his empire to the edge of what is now Iran, Tajikistan and Kyrgyzstan.

By the end of his reign, Chandragupta Maurya had unified almost all of the Indian subcontinent under his rule. His grandson, Ashoka, would go on to add Kalinga and the Tamils to the empire, as well.

In 298 BCE, the emperor renounced his rule, handing over power to his son Bindusara. Chandragupta traveled south to a cave at Shravanabelogola, now in Karntaka. There he meditated without eating or drinking for five weeks, until he died of starvation.

Chandragupta is remembered as the unifier of India and was the first king to be depicted on an Indian Postage Stamp.