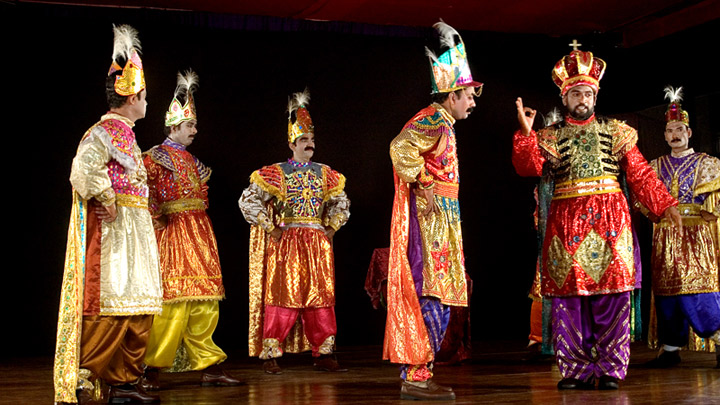 Chavittu Nadakam a folklore art practiced by Roman Catholics belonging to Latin Rite in the districts of Thrissur, Ernakulam and Alappuzza of Kerala state in India.

The art form was evolved during 16th century with the influence of Portuguese who came to Kerala Malabar coast for trade and missionary work.

The performers wear glittering Greco-Roman costumes. The bell and drum are two instruments used as background score. The language is Malayalam with some mix of Tamil.

Tradition says that Portuguese were impressed by the early forms of Kathakali and took initiative with the local scholars to develop a new musical dance-drama art form mixing Kathakali and European Miracle Play.

Chavittu Nadakam means 'Stamping Drama'. It is usually performed on open stages. The actors sing their lines loudly and with exaggerated gestures, stamp their feet with great force on the wooden stage.

The whole play is performed through musicals. Dance and instrumental music are combined in this art form. The bell and drum are two instruments used as background score. The actors themselves sing and act.

The stories are mostly the heroic episodes of Bible or great Christian warriors. Historical incidents, the life and adventure of heroes.