Curly Or Straight – The Twin Tale

Tanya and Susan were twins (not the identical ones). Being very similar in looks, they played pranks on their parents and friends very often. But the one remarkable difference always got them caught. It was the texture of their hair. While Tanya’s had poker straight hair, Susan had curly hair. Both wished for a magic that could make the difference vanish. Then one day they were acquainted with the technique of hair straightening called Re-bonding. Excited, both decided that Susan will bid her unmanageable locks goodbye.

Determined to get it Re-bonded, they rushed to the parlor. There they met Joe – who was Susan’s hair stylist for the evening. The straightening process would take two hours- Joe stated. Just as Joe applied the cream, Susan sighed, “I wish someone could explain why our hair is so different and how this re-bonding actually works”. Click here to get study material for class 9

“Your wish is granted“  said Joe. This made both sisters turns their heads. Joe introduced himself and said that he happened to be pursuing his Masters in Chemistry and working as a hair-stylist at the same time, as a hobby. He then started to explain to the two girls, all they wanted to know about hair.

Joe explained – Girls, there are three main reasons why your tresses are so different.

1. Its all in the genes– Genetics decide the type of hair that you have.  The variation in hair texture can be attributed to the variation in the DNA. One gene has two allele or contrasting characters. One may have different version of alleles, like curly or straight. People having both the alleles of curly version, have curly hair; while those with two straight version, have straight hairs. The curly version of allele is not completely dominant, therefore if someone has one curly version allele and other of the straight type, then they will have wavy hair. 2. The root of the issue – Hair has two major components – the follicle and the shaft. The visible strands are the shaft, while the follicle resides within the skin of our scalp. The shape of the follicles is a major determinant of our hair texture. Straight hairs usually have round hair follicles, while curly hair possesses an oval shape follicle. The flatter the oval is, the curlier the hair will be. Moreover in curly hair, the scalp has a hooked end. However, in people with straight hair, the follicles have no hooks. 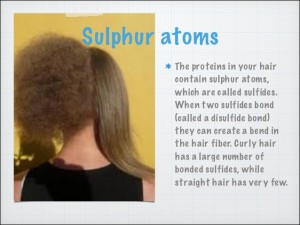 The interesting explanation made the boring hair straightening routine, an exciting one. The time flew and half of the re-bonding was done.

The mechanism –  The method targets the disulfide bonds. The basic method is to break the bonds – whether by heating or applying chemicals. After this, another solution is applied after sometime. This solution neutralizes the effect of the previous one. It stops any further splitting of bonds. Meanwhile the hair is held straight so that the bonds are re-formed at new positions, making the hair straight.

Usually strong reducing agents like Sodium Hydroxide or Calcium Hydroxide are used to break the disulphide bonds and reform them. Alkaline solutions are applied to hair to break the bonds. The hair is then held straight and acidic solutions are applied to it. The acid neutralizes the base and prevents further splitting of bonds. This allows the disulphide bonds to reform in new positions. The application of these chemicals causes the hair to swell, so the hair is usually treated with a cream to protect it from the caustic effects of these chemicals, before applying the alkaline hydroxides.

Solutions like Thioglycolate are also used, and are much safer. Thioglycolate has thiol groups, which are good reducing agents and help break the disulphide bonds. A strong oxidizing agent, such as Hydrogen Peroxide, has to be applied after Thioglycolate treatment in order to stop the reaction and help the bonds reform making the hair straight.

The Re-bonding was complete, when Susan saw herself in the mirror she could not believe her eyes. She was looking like a replica of her sister. Both were jumping with joy . They were grateful to Joe who did a miracle but also explained evrything the sisters ever wanted to know about their hair. Now that the only difference had gone, a mischievious idea came to their mind, they planned a prank on their friends while on their way home. The plan that they had chalked out, worked very well; nobody could tell them apart. Their joy knew no bounds as their prank was successful the very first time.