Downpour: To Walk Or To Run? One fine evening Johnny was walking down the bustling streets of New York. After a rough and busy day at work, he thought of spending some time in The Central Park- some people go there for tranquillity and some others call it the chirpiest of all places in New York. He was enjoying his stroll down the lane and suddenly it started pouring heavily. Johnny thought, “I should increase my pace to reach under a roof”. He started walking fast in order to save himself from the showers. After a while, Johnny started running, to reach faster and get less wet. However, Johnny found out that his idea of getting less drenched by running did not come out the way he thought. He pondered about it for a while and then decided to call up Bob, his Physicist friend.

Bob said, “Our common sense has it that we should run so as to get less hit by the raindrops.” But Physics has to tell us something else. When you are caught in a downpour with no umbrella, running as fast as we can is the best way to minimise wetness. Some people argue that when you walk, less area of the body is in contact with the raindrops. So, is resigning yourself to a brisk walk or sprinting your way to the warmth and sweet dryness of home, recommended?

When you are walking it means you spend more time out in the rain, which implies more wetness. And, running means you spend less time getting wet, but getting hit by more raindrops from the side. When you walk out of the way of one raindrop, you are heading into the path of another drop. This means a constant amount of raindrops is hitting you at the top, regardless of how fast you walk. When you stand still, the number of raindrops hitting is equal to the density of the rain times his width times his thickness times the velocity of the rain in the downward direction. This formula won’t change if you are walking or running because the downward velocity of raindrops will not change with respect to the person. On the other hand, the rain will have a horizontal velocity with respect to the person, and will start to hit from the front. So, the number of raindrops hitting you does not change if you run or walk. When you are not moving, the rain that’s falling on top of you is all that you will get. But, on moving, you will come in contact with raindrops from the side. 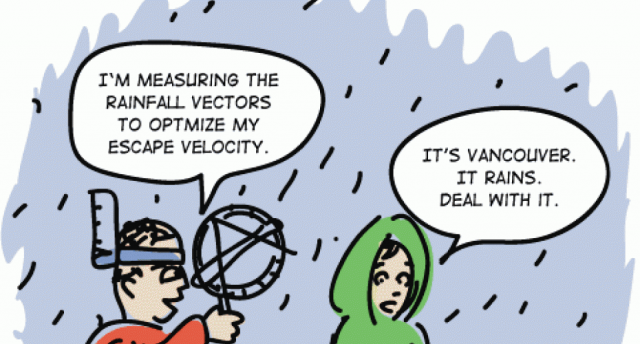 That is, if want to stay driest, you should just stand still, in the middle of the rain. But that is just insane and is not practical. People who drive past will think of you as someone gone mad. Hence, you have to move and as fast as possible. Because the amount of rainfall that you will be exposed to is the same regardless of whether you walk or run. The time spent in the rain is actually the determinant factor for total wetness. For a person who sprints as opposed to a person who walks, gets hit by less rain, because the time taken to travel the same distance is less.

The formula for total wetness is given by,

Some of the tips worth remembering are, attempt to jog at a speed equal to the wind speed if the wind is blowing in a direction you are travelling. In this pace, you will feel the least wind and rain smacking against you. And, if the wind is hitting your back at an angle, jog a little faster than you think it is blowing.

If you’d like to forget about running, walking or standing still, the best way to avoid getting soaked in the rain, is to carry an umbrella!