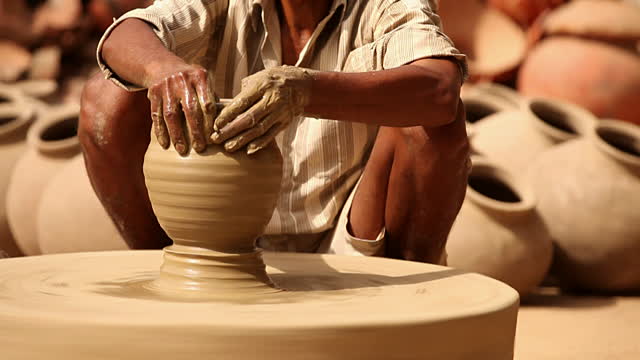 When gods and demons were churning the ocean (Sheersagar) for the divine Nectar (Mahamrita), an earthen pot emerged. This is believed to be the first earthen pot ever created by the potters. Commonly known as Matkas, earthen pots are a vital accessory for Indian kitchens. They function as traditional refrigerators.

Matki, (or Matka) is a Hindi word used for an earthen pot.  It has been in use in  India since the Indus Valley Civilisation and can be found in houses of every class.

For generations, earthen/terracotta pots have been used to store water and keep it cool as water stored in matkas or surahis for a few hours gets cooled at about 10⁰C and 14⁰C. The water kept in matka is said to have a refreshing flavor and is just at the right temperature – not too warm and not too chilled.

The cooling process works through evaporative cooling. Capillary action causes water to seep and evaporate from the mini-pores in the pot, taking the heat from the water inside, thus making the water inside cooler than the outside temperature. Hence it is used only during summer and not in winter.

They are made by the combination of two types of mud clay: the first is taken from the surface of the earth and the second after digging more than 10 feet deeper into the earth. Making a matka takes a considerable amount of time. It is a long process of at least 8 days. The clay is mixed with water, shaped, finished, polished, dried and baked in a kiln for 5 days. At last it becomes a completed eastern earthen pot, a home water cooler.